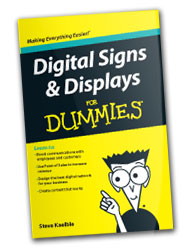 [2]It is imperative to point out that the book was created for Scala. However, much like the majority of the range it does not present itself as a piece of promotional literature, even though to many with industry experience it is clear that this is what it is. This sponsored ‘reference’ translates to nothing more than an apparent lack of research by the author Steve Kaelble.

Sixteen-Nine’s Dave Haynes said in his piece a few weeks back [3] “So who is “noted author” Steve Kaelble? Well, a rummage around the world’s biggest bookstore suggests his one book title is Environmental Commodities for Dummies, which is about Lord knows what. He has written a lot of magazine pieces on business and technology”.

A great sense of disappointment also lies with the publisher, Wiley. With over 150 million books in print and more than 1,400 titles, Dummies is the world’s bestselling and most trusted reference brand. The public have always trusted Wiley to deliver a balanced, informative and thorough overview of a topic or industry.

I believe that the publication of this title exploits public trust in their brand and does not provide a representative overview of what is an extremely diverse industry. You cannot suggest that there is no “one size fits all solution” and then disregard an entire segment of the industry. For Wiley to allow this title to be released seems to contradict the generally high reputation of comprehensive material built up over the past 20 years.

Our main grievance with ‘Digital Signs and Displays For Dummies’ is that it excludes a huge portion of the market with a host of calculating and false claims, such as “In general, the lowest cost of entry is though a Software as a Service”.

This captures the general overall theme of the book; ignoring the cost effective white elephant in the room – plug and play solutions. Another claim, made in the introduction, “Making changes from a remote location is what digital signs and displays are all about” not only overlooks any other economical solutions but suggests that digital signage must have this facility – which is not the case for thousands of end users.

It is important at this point to make it perfectly clear that sometimes a networking option may be the right choice, however it is not the only solution and rarely the best one for entry level users (especially small businesses).

The book does have its qualities. Some of the advice regarding content is highly informative, useful and sound. The same can be said for the sections on applications, possible locations and scheduling. In fact the overall quality of the writing is excellent, with the familiar advisory tone that readers of ‘For Dummies’ books have come to expect and love.

It is however this long standing trust, that I believe has been abused; in this case to shamelessly promote and portray one company and their ideals as an entire industry.

From our point of view we feel that it is necessary to start with the user’s requirements and limitations. According to the UK’s Federation of Small Businesses [4], small and medium enterprises account for 99% of all UK businesses. Often these companies do not have the resources, time, commitment, money, technical knowledge or man power to set up, operate, update and maintain a digital signage network. It is in these frequent situations that we offer the best possible solution within their capabilities – plug and play.

In conclusion ‘Digital Signs and Displays For Dummies’ should simply be renamed ‘Scala For Dummies’ much like previous company specific titles; ‘eBay For Dummies’ and ‘Connecting People using Google For Dummies’.

‘Digital Signs and Displays For Dummies’ is both equivocal and misleading for the reader and I can only hope that this does not become a trend for this series of books or it could lose its well earned reputation.