Akoo TV, one of the largest Nielsen-measured out-of-home television networks in the U.S., has continued its expansion across the nation’s premier shopping malls, adding the Houston Galleria, a top shopping destination with more than 24 million annual visitors, and Arundel Mills, the Baltimore area’s largest mall. 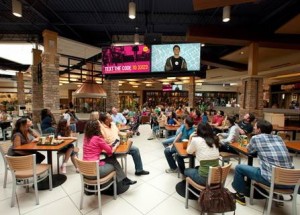 With these and the addition of other new locations in California, Texas, Maryland, and North Carolina during the fourth quarter, Akoo TV now is available across 165 malls in 60 top markets.

And, further, Akoo TV is experiencing a record number of on-demand mobile interactions in 2011, reporting a consumer transaction every four seconds across the network. Overall, it’s experiencing a 30% increase in the number of on-demand consumer interactions across the malls, says Andy Stankiewicz, executive vice-president, chief communications officer of the expanding network.

Akoo TV’s interactive entertainment programming is featured throughout the most highly trafficked seating areas in each mall – the ‘Akoo Pavilions’ – which attract 64 million shoppers each month.

The network is powered by Akoo’s patented interactive technology, which enables viewers to make on-demand content requests with their mobile devices, via free mobile app or text messaging. Viewers within Akoo Pavilions can also access free Wi-Fi services, connect with friends via Facebook and Twitter, download mobile coupons, and participate in special promotions.

This entry was posted on Wednesday, December 21st, 2011 at 06:00 @292 and is filed under DailyDOOH Update. You can follow any responses to this entry through the RSS 2.0 feed. You can leave a response, or trackback from your own site.