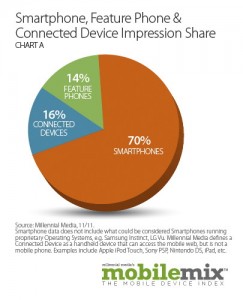 [1]Impressions on the Kindle Fire, an Android tablet, have grown at an average daily rate of 19% since its launch in November, with a monthly run rate of hundreds of millions of impressions.

The Kindle Fire has slightly outpaced the impression numbers from the launch of the iPad in early 2010. In fact, the Kindle Fire has made an impact on the connected device market right out of the gate with early signs of strong consumer adoption.

Of course, while the Kindle Fire was introduced into a more mature tablet market than the market which greeted the original iPad, the integration of Amazon’s robust digital entertainment library and the $199 price point may also have helped drive this early use by consumers.

The iPhone remained the top individual phone on the Millennial Media platform, and grew 8% month-over-month in November. 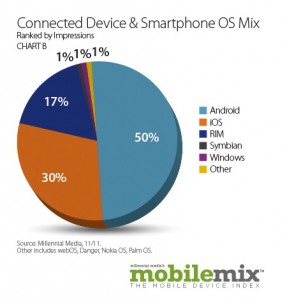 Touch Screen has been the leading Input Method on Millennial Media’ platform for over a year with 65% of the impression Share. Touch Screen impression growth is largely tied to the increased popularity of Smartphones and Connected Devices.