The Metropolitan Manila Development Authority (MMDA) is taking steps to prevent further cluttering of the Philippine capital’s skyline due to the (supposed / alleged) abuse in the use of billboards. 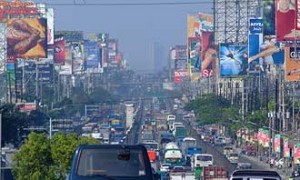 Supported by the Philippine’s Metro Mayors Council (MMC), the MMDA will enforce the new set of regulation guidelines on the use of billboards and other advertising signs along major thoroughfares in the metropolis.

MMDA Chairman Francis Tolentino said the new guideline will set a uniform standard for billboards and other advertising media in the metropolis’s skyline.

The first guideline deals with the issuance of structural and locational clearances for billboard operators where the MMDA shall enforce and implement the National Building Code provisions on billboards along major and national thoroughfares falling within its jurisdiction.

A separate guideline deals with billboards height and size requirements.

The guideline on locational and structural clearance and on height and size limitations further provide that, effective this month, all existing billboard building permits, business permits and clearances shall be disregarded or deemed canceled, and all billboard sign owners shall be required to apply for clearances or permits anew from their respective local government units.

Under the new guidelines, all billboards must have a size of 60×40 feet and be at least 100 meters apart, or these will be removed. The campaign objective is to institute a standard on billboard similar to those implemented in other countries such as in São Paulo, Brazil, and Honolulu in Hawaii, United States, where many areas are billboard-free.

In 2006, a similar regulation in Brazil resulted on the elimination of 15,000 billboards under the “Clean City Law” impose by São Paulo’s mayor, Gilberto Kassab. Still the city’s business is growing strong. Citizens are happier with a cleaner-leaner city and advertisers had to find new creative ways using the internet and social media to capture their potential customer’s attention.

Tolentino said under the new guidelines, owners and operators of billboards along major thoroughfares such as Edsa, C-5, Roxas Boulevard and Macapagal Avenue shall obtain a clearance from the MMDA.  Meanwhile, all billboard owners are required to submit their existing permits to the MMDA and their respective local government units for verification and validation.

The agency said they are set to remove or dismantle some 424 billboards along the metropolis’s main thoroughfare out of the 2,000 such structures for  violations such as failure to show building permits, certificate of use, violation of the National Building Code and locational clearance.

Despite his tough stance on the issue, the MMDA chief said he is still willing to sit down and talk with the members of the Outdoor Advertising Association of the Philippines (Oaap), who have filed a case against the enforcement of the guidelines before the Regional Trial Court in Makati.

This entry was posted on Tuesday, January 3rd, 2012 at 10:00 @458 and is filed under Scuttlebut. You can follow any responses to this entry through the RSS 2.0 feed. You can leave a response, or trackback from your own site.