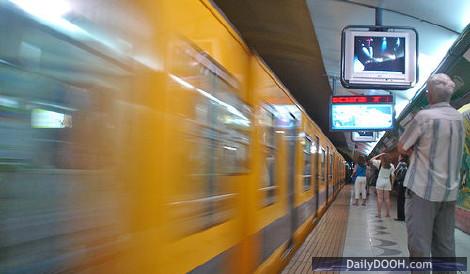 The last thing that you feel like telling people here in Buenos Aires is that you are English – perhaps the bowler hat and the umbrella probably give it away? Ed

Harrods looks like it has been closed since the Thatcher era, the British Park has been renamed BUT the Torre Ingles (supposedly a copy of Big Ben) that we once gave to the Argentinians as a gesture of friendship is still standing proudly – albeit with a huge Argentine flag fluttering in front of it now!

However, talking football is allowed, if not actively encouraged as long as you do not mention ‘La Mano de Dios‘

I have got tickets for the big match tomorrow (this Sunday) between Boca Juniors and Racing (if Boca win, then they’ll be champions again).

The city itself is a striking contrast of rich and poor, but they seem to cohabit well and the place definitely has a buzz – feels like a cross between Barcelona and New York.

There’s not much evidence of Digital Signage, though a couple of the examples that I have found have taken the term literally – static images that change occasionally!

In ‘Farmacity’ (a large chain of para-pharmacies like Boots) the shops are well equipped and the presentation is tidy.

In the famous ‘Galeria Pacifico’ a late 19th century shopping arcade in the centre of town, a well-placed column greets you as you mount the escalator; content here is advertising for the local boutiques plus a special credit card for the arcade.

Here we see a mixture of travel and weather information plus advertising, though the taste for 3D animations is err how we might say ‘special’ 😉

Curiously the network runs off of huge CRT TV sets (rather than flat screens) with FULL sound (even more curious is the fact that you can hear them).

The screens are placed at the edge of the platform, back to the direction of the incoming trains so it is difficult to tell if people are watching the screen or just straining to see if their train is coming.

We’ll have some of our own pictures up later in the week.

For the Google translation look here

This entry was posted on Saturday, November 29th, 2008 at 11:27 @519 and is filed under Scuttlebut. You can follow any responses to this entry through the RSS 2.0 feed. You can leave a response, or trackback from your own site.