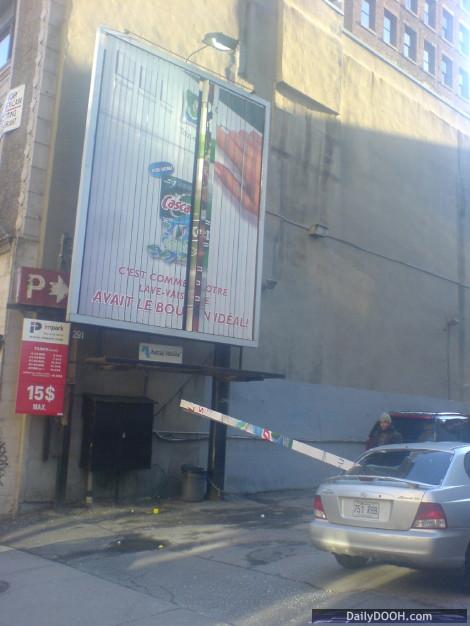 We had a good response to our first ever caption competition – some of you may have not taken us seriously with the ‘competition’ bit – anyway we are and WERE seriously inviting you to submit your captions for the picture shown above – taken in Montreal exactly a week ago.

My personal favourite is from Bryan Crotaz at AMX / Inspired Signage who was the first to comment and gave us the caption ‘Billboard gets the boot’ !!!

The owner of this grey Vauxhall parked in a side street in Montreal will have come back to his car only to find one of the vains from the (traditional) billboard (shown on the left of the picture) has fallen off and into the rear window of his / her vehicle.

Some of the entries that we have received to date include…

We will leave the competition open for one more week – the winner as chosen by our editorial team will get one of our first ever T-Shirts and a Book.

18 Comments To "‘Billboard Gets The Boot’ – Caption Competition"

Billboard gets the boot!
Thus the vain are fallen?
Digital – works across ALL verticals!
Digital works on Windows – not through them!

My French blinds always do that too!

So that’s what they mean by ‘Customer Interaction with Media’

Is this what is meant when the term “Pixilation” is used?

– “wow! that 3D effect on that billboard is SO realistic…”

Astral Media showcase the very latest in customer measurement techniques.
So much for “The Quiet Revolution”

Is this an example of a segmented ad break?

Jacques had never been very good at assembling flat-pack kits…

A Billboard to Forever Remember…..It just get into you !!!