#CES Three Men On The Bummel

#CES has sort of already kicked off (though the exhibition proper opens Tuesday) but either way the DailyDOOH men will be there (the womenfolk have been left in Buenos Aires, Montreal and Devon) for what is the first of several trips for us to Las Vegas this year (warning: #dse2012 is not long away folks). 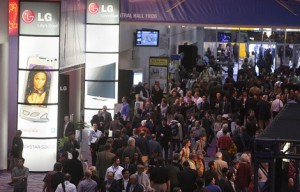 I haven’t been to #CES since I scoped out the show for Intel, in preparation for them exhibiting the following year, (and I am going to show my age here) back in 1994.

I can remember the year well as the MGM Grand hotel had just opened (at the time it was the largest hotel in the world) and a certain Barbra Streisand had two sell out shows at the hotel (I actually met Barbra in person ten years later and it broke the ice when I made mention that I saw her in Vegas all those years ago but I digress).

In 1994 the show was known as the ‘Winter Consumer Electronics Show‘ (there being a summer event in Chicago in previous years) and the event I remember (for some reason) dominated by booth babes in not very much clothing (yes I went to the right show). At that time a lot of the ‘Consumer Electronics’ were automobile accessories although over successive years that quickly changed as the likes of Intel, Microsoft (Microsoft have stated that 2012 will be their last year exhibiting) and other computer manufacturers and game companies moved in.

In 2011 over 128,949 people attended then, a completely different sort of event that I first saw back in 1994. This year will no doubt see a similar number crawl and snake their way around 1.8 million square feet of booths and exhibits (so huge is this floor space that the exhibition area is NOT just limited to the LVCC but also spread around other hotel properties and the like).

In terms of digital signage, we know that Multitouch, Gefen and a number of 3D vendors are already exhibiting – a couple of #DSTop10 execs and CEOs have told us they will be there walking the floor and with consumer products such as Kinect being hacked and used in our space more and more there will no doubt be a lot on show (if one can find it) that will be of real interest.

Mobile technology of course plays a big part of the show and if we can stay away from all the iPhone and iPad gadgets on offer (the number of press releases we receive which are ‘iPx’ related dwarf everything else by a long way) there’s bound to be something relevant there as well.

We will be writing a full report for two investment clients of ours on what we saw that was relevant to our space and we will try to share as much of that with you as we can as we go along.

This entry was posted on Monday, January 9th, 2012 at 09:31 @438 and is filed under Scuttlebut. You can follow any responses to this entry through the RSS 2.0 feed. You can leave a response, or trackback from your own site.