Thanks From All At DailyDOOH Towers…

Thanks to all our clients, friends and suppliers who sent DailyDOOH Towers Christmas presents this year.

Next to a terrific CD box set covering Michel Pagliaro‘s recordings from 1971 to 1988 are nice bottles of red and white wine and a box containing a bottle of 2004 Cristal. In the antique Dom Pérignon Champagne bucket there is also a great 2002 Vintage Champagne… 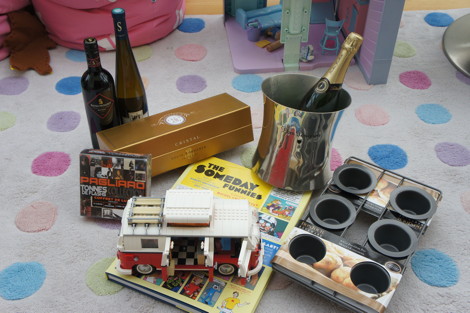 The Someday Funnies (the big yellow book in the picture) is a collection of 129 comic strips commissioned in the 1970s, on the topic of the 1960s. It’s superb.

A popover is a light, hollow roll made from an egg batter similar to that of Yorkshire pudding, typically baked in muffin tins EXCEPT now we can make them in proper Chicago ‘popover’ tins (the result of which is shown below).

The Lego VW Campervan came as a German left hand drive variant and that just wouldn’t do, so it has already been converted to right hand drive and given English number plates!

Oh! and there were two delicious Panettones as well (but they got eaten before the photograph was taken).

This entry was posted on Friday, December 30th, 2011 at 11:28 @519 and is filed under Scuttlebut. You can follow any responses to this entry through the RSS 2.0 feed. You can leave a response, or trackback from your own site.

One Response to “Thanks From All At DailyDOOH Towers…”