We promised you a host of software announcements on (our self proclaimed) ‘announcement Monday’ but as it turned out, only two announcements from ComQi and, IAdea and Scala actually materialised. 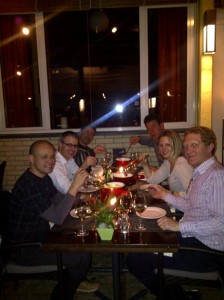 Who's having cheese fondue in the swiss alps?

The OpenSplash related press release got lost somewhere between the UK and Israel (whoops, now there’s a hint for 12:55 GMT Tuesday).

So, what’s in store for the rest of this week then? Well, from North America we have a couple of exclusive interviews lined up with Brian Reid from Mirrus and Yeahpoint‘s Mitch Wade.

In South America, Geny Caloisi has been keeping herself away from the beach, visiting various networks and software vendors in the region and we should have the first of some of her reports up by the end of the week.

There’s also rumour of an interesting Digital Signage Federation announcement mid-week. Whilst we expect it to be only 4.5 out of 10 on the ‘earth shattering’ scale we think it will be newsworthy enough to make people stop in their tracks.

This entry was posted on Monday, January 9th, 2012 at 19:26 @851 and is filed under Scuttlebut. You can follow any responses to this entry through the RSS 2.0 feed. You can leave a response, or trackback from your own site.