Is This The Shop Window Of The Future?

Back in February 2008 we wrote about ‘CityScape Media’s Virtual Shop‘ which first saw the light of day in Amsterdam earlier this year. Since then the likes of Nokia, IBM, Orange, Lee/Wrangler, Procter&Gamble (for their Hugo Boss fragrance) and Roche are just some of the brands that have used this new in-window medium. 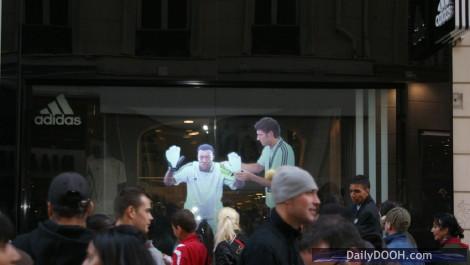 The picture above, taken 10 days ago in Marseille shows how Adidas France have been using it – it’s basically a virtual experience with both images and sound, something they call a “VirtualShop” – although we would liken this technology to ‘mannequins’ rather than ‘shopping’ per se (after all there is for example no e-commerce associated with the technology and nothing is ever ‘bought’ looking at the window).

VirtualShop is supposedly unique due, we are told, to the 99% transparent projection screen (called rather conventionally ‘VirtualScreen’).

CityScape Media B.V. have been pretty quiet with PR since we first noticed them at the beginning of the year but in actual fact they have been far from quiet on the ‘building a business’ side of things. In 2008 they won the number 1 marketing prize in Belgium for a Nike European event – installing an LED-wall of nearly 28 meters long and 2,8 meters high (265 LED-panels) on which an athlete was shown which you could challenge and compete against.

The trend this year in retail has been very much to get screens in store windows bigger and bigger, and whilst we think this (big’ness) is admirable when the content and creative work hand in hand with the larger screen real estate, we have already said that ‘shape is the new king‘ and the 4:3 and 16:9 aspect ratios will seem rather boring when folks realise what you can do in a window (expect some major announcements from folks in Q2 2009).

The 3M Vikuiti Mannequin and this VirtualShop are indeed two other superb deployments that we believe will soon become standard in retail.

This entry was posted on Monday, December 1st, 2008 at 19:54 @871 and is filed under DailyDOOH Update. You can follow any responses to this entry through the RSS 2.0 feed. You can leave a response, or trackback from your own site.

One Response to “Is This The Shop Window Of The Future?”