An Interview With Yeahpoint’s Mitch Wade

Yeahpoint, a nine-year-old company founded by CEO John Anderson in Brisbane, Australia, set up a North American office in San Diego, headed by Mitch Wade, general manager of the Americas, six months ago and is already getting on the fast track to introduce the company’s offerings.

We wanted to learn what the company was up to, after learning that it will be exhibiting at the National Retail Federation Show at booth #271 in association with Toshiba, a minority partner in the company.

“We’ll be showing several products at NRF, our first trade show,” says Wade, whose background includes positions with Kodak and HP as well as selling in the tech industry. “Our business involves self-service solutions and digital signage, and everything we do is interactive. Further, everything we do is measurable via our own facial recognition software.” (Yeahpoint partnered with a company in France for the facial recognition software that identifies by age, sex and mood – the latter determined via the eyes and mouth – of the potential customer.)

In addition, everything Yeahpoint does is powered by its own software platform, yeahWARE CORE9, which, says Wade, can support applications and platforms by other companies as well. (Core9 is also rebranded and sold by Bizerba, a Germany-based company with offices in several countries.) 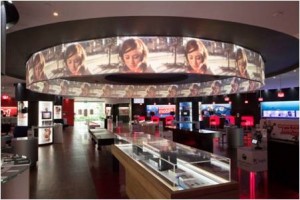 Yeahpoint provides self-service solutions for kiosk, signage and mobile platforms to a wide range of industries right across the globe. Its solutions are used by such companies as SingTel, Unilever and Billabong.

“The company custom designs its self-service technology for any industry,” says Wade. “Our key focus is to set your business apart and increase sales and growth above and beyond the rest.”

Yeahpoint develops everything from single applications right through to complete turnkey solutions, aimed at giving stores real intelligence about their customers. For Sing Tel, Signapore’s largest telecommunications company, it has digital wall signage, plexiglass banners, tabletop screens and more in 15 stores, with 100 screens in the flagship store. All are powered by CORE9, including an interactive window which gives passers-by information 24/7. 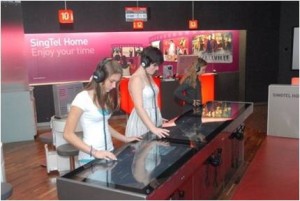 Yeahpoint is currently working with a potential customer for an in-store CRM system which would involve Near Field Communications as part of the offering.

MiMirror creates a consumer experience allowing customers to not only see how they look in various outfits but also to easily share their shopping experiences with friends online. Packaged as both a touch screen and digital mirror, MiMirror means that shoppers can try on products and use it to take photographs to compare how they look while also sharing the images with their friends via social media sites such as Facebook and Twitter.

It’s unique, innovative and is already generating serious interest from fashion retailers around the world. Already using it are Soviet stores in Johnannesburg, Republic in London, and Guess in Singapore.

People can use MiMirror to compare how they look in various outfits, side by side, through the interactive digital touch screen to help them make their purchasing decision. MiMirror allows retailers to use their customer’s social networks to market their brand effortlessly. Guess in Singapore drew people by allowing the customers trying on the outfits to send their photos to enter the 2011 Elite Model Look contest.

Using interactive technologies such as in-store touch screens, recipe printing solutions and even facial scanning, customers can use Touch2Cook‘s simple interface to browse through the latest recipes and dishes, selecting the ones they like with a recipe list printed straight away as well as an in-store map to the ingredients they need. Retailers can simply change their menus and promote anything from excess stock to special discounts and offers.

Through its sleek touch screen interface, Touch2Cook also eliminates the need for a ticketing system and queuing at the deli counter, with a facial matching solution allowing orders to be matched to the customer’s face and prepared at the back of the store. Then, when the customer finishes the rest of her shopping, the order is matched to her face, ready to pick up as she leaves the store or heads for the cashier.

Touch2Cook can also allow retailers to share recipes, discounts and special deals through social media on their in-store signage, kiosks and online. It is currently being used by Cold Storage in Singapore, Cooks in Australia (where it’s also integrating with Facebook), and Harrod’s in London.

Also being introduced for grocers and supermarkets is Yeahpoint’s Intelligent Waste Management system. An interoperable IT platform developed specifically for supermarkets for significantly improving economic and environmental issues associated with perishable food shelf life and waste stream management.
The IWM system gives the supermarket an integrated, localised store strategy and technologies to:

This product will initially be deloyed by a grocer in The Netherlands.

Yeahpoint is expected to show most of these applications at NRF, except for the still-under-development CRM-NFC application.

Wade says that the strategy in the U.S. is to develop partnerships, replicating its partnership successes with Toshiba and Bizerba.

“We also want to make agreements with system integrators and vertical market partners,” he says. “We can also see applications beyond food and fashion retailers into health care and correctional facilities and in the automatic vending sectors.”

This entry was posted on Tuesday, January 10th, 2012 at 08:00 @375 and is filed under DailyDOOH Update. You can follow any responses to this entry through the RSS 2.0 feed. You can leave a response, or trackback from your own site.