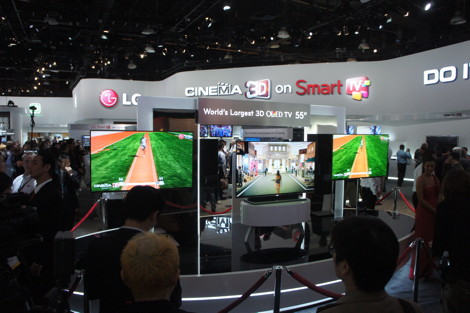 Most of the mainstream press were in agreement though (we quote from ABC News’ C. Michael Kim and David Miller as just one example), that “The biggest buzz so far at the Consumer Electronics Show comes from the new OLED (Organic Light Emitting Diode) televisions from the giant South Korean manufacturer Samsung”.

Samsung’s product was also 55″ OLED TV and all of those OLEDs are super slim.

This entry was posted on Wednesday, January 11th, 2012 at 20:51 @910 and is filed under Scuttlebut. You can follow any responses to this entry through the RSS 2.0 feed. You can leave a response, or trackback from your own site.