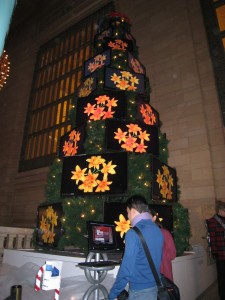 It’s common knowledge for seasoned New Yorkers to steer clear of the massive crowds at tourist havens like Times Square, Rockefeller Center and Grand Central Station during the holiday season BUT as I’ve stated before – It’s my job to frequent these places.

This December, Sharp’s Aquos brand revealed its latest stunt for self-promotion in NYC’s Grand Central Station. A “tree” consisting of 43 LCD Panels- with 52? units at its base that progressively get smaller as the tree tapers toward the top -which would be translate into their 19″ LCD models. The monitors were synched up with a video processing unit that allows video content to play across all the screens. The content is the creation of TSUYOSHI TAKASHIRO, a Japanese video artist that was commissioned specifically for this project. Sharp is also this year’s sponsor for the annual “Kaleidoscope Light Show”

This event was the perfect vehicle for Sharp to bring awareness to their corporate charity- THE HOPE PROGRAM, a non-profit organization that provides job training and career counseling to those who are less fortunate and help them to get out of poverty.

Of course,  there is also an opportunity to sign up and win one of the AQUOS LCD TVs on the Christmas tree. With each registration Sharp donates 1.00 US dollar to The Hope Program’s Green Collar Project, which trains people to work in environmental jobs such as solar panel installation.

This entry was posted on Tuesday, December 16th, 2008 at 13:13 @592 and is filed under Scuttlebut. You can follow any responses to this entry through the RSS 2.0 feed. You can leave a response, or trackback from your own site.