MultiTouch Ltd., developer of modular multi-touch LCD screens for large-scale displays, is showcasing a range of new multitouch applications at #CES in Las Vegas this week. 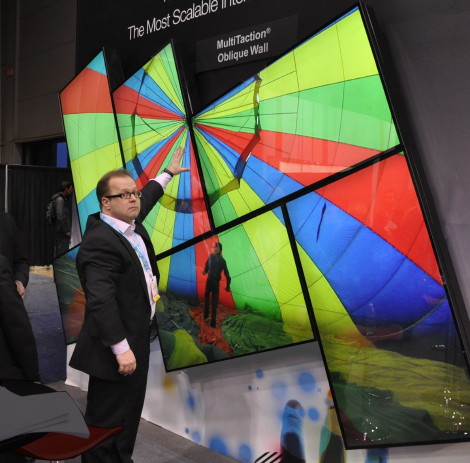 The company is highlighting one of the largest asymmetric multi-user touch walls, the MultiTaction Oblique Wall, which is comprised of the company’s MultiTaction Cell 55” LCD displays at booth #15512.

“Multi-user multitouch experiences are now part of the lexicon for designers and developers worldwide, and our booth at CES 2012 displays concept implementations of multitouch applications that explore a wide range of possibilities using our products,” says Timo Korpela, general manager of MultiTouch Americas. “We want to spark a greater level of ideation from the creative community with our new line of MultiTaction Cell products, and ourdemos characterize just a few of the myriad concepts that we believe will gain greater adoption in the coming year.”

The MultiTaction Cell 55” is available now for orders direct from MultiTouch or through MultiTouch resellers around the world.

This entry was posted on Thursday, January 12th, 2012 at 18:23 @808 and is filed under Scuttlebut. You can follow any responses to this entry through the RSS 2.0 feed. You can leave a response, or trackback from your own site.