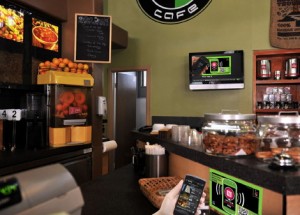 HotelTonight, a travel application which offers some of the best pricing for last-minute hotel deals, wanted to take advantage of the latest in innovative mobile and out-of-home marketing technologies to promote its mobile app. Given that HotelTonight is the ultimate way to book a same-day hotel stay via a mobile device, Blue Bite wanted to do something different.

This campaign represented what is believed to be the first use of NFC for a marketing campaign targeting consumers across a handful of major U.S. markets. Amobee utilized RMG Networks locations outfitted with Blue Bite’s mTAG Platform to reach HotelTonight’s core demographic.

Mobile phone users walking through any of the eight major U.S. airports or hundreds of busy downtown metro café locations running the campaign saw a 30-second video promoting the app on one of RMG’s digital screens. Interested consumers then had the option to tap their NFC handsets on Blue Bite’s mTAG located in the venue to immediately download the HotelTonight app. Consumers without NFC on their mobile phones could also download the app using a QR Code, Bluetooth or WiFi.

“As people rely more heavily on their mobile devices, digital place-based media has become the front line for marketers looking to engage active consumers who are on the path to purchase,” says Chuck Strottman, senior director of marketing, RMG Networks. 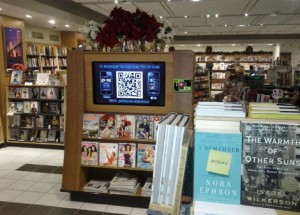 “Innovative digital players like HotelTonight understand that mobile plays an invaluable part in the brand experience and consumer engagement,” says Mark Strecker, COO, Amobee. “Many merchants are starting to use Amobee’s leading edge mobile advertising technology to interact with the physical world, whether it be through NFC, QR codes and Bluetooth technology, to provide an engaging customer experience and maximize revenue.”

Despite NFC’s recent entry into the U.S. market and its early stage as a marketing tool, its ease-of-use and the promise of media-rich, relevant mobile engagements have led to increased interaction levels. Over a six -week campaign, HotelTonight achieved:

The campaign demonstrated the simplicity and effectiveness of NFC across various markets. The power of enhancing digital place-based media with mobile is tremendous and drives real results for those interested in application downloads as well as other mobile engagements.

This entry was posted on Thursday, January 12th, 2012 at 10:20 @472 and is filed under DailyDOOH Update. You can follow any responses to this entry through the RSS 2.0 feed. You can leave a response, or trackback from your own site.