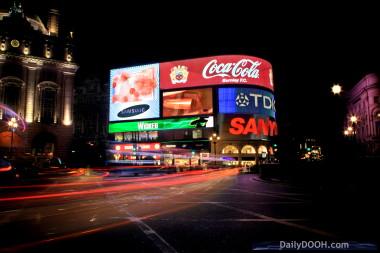 Land Securities, which has owned Piccadilly Lights since the 1970s, has developed “Piccadilly Lite” in order to allow more advertisers to benefit from the global exposure the site provides.

I see that Clear Channel Outdoor is now working with MT2 – the sole managing agents of Piccadilly Lights – to enable brands to advertise their campaigns.

The site, which measures 23m by 2m, reaches an audience in excess of 2.2m per fortnight.

Interestingly Piccadilly Lite will also allow members of the public to post personal, rolling messages at the cost of £1,000 per minute (blimey).

The addition of Piccadilly Lite will not change or alter existing long-term campaigns on Piccadilly Lights – which of course include; Samsung, McDonald’s, Coca Cola, TDK and Sanyo.

This entry was posted on Tuesday, December 4th, 2007 at 13:24 @600 and is filed under Scuttlebut. You can follow any responses to this entry through the RSS 2.0 feed. You can leave a response, or trackback from your own site.