I looked forward to interviewing Denise MacDonnell, general manager of Harris Digital Out-Of-Home, in part because, as a born Nova Scotian, it’s not often that I have a chance to talk to another Nova Scotian in the digital out-of-home industry. 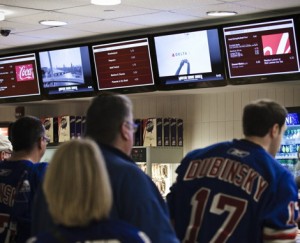 But when we interviewed MacDonnell from her office in Denver, Colorado, on Friday, the timing was precipitous: Unbeknownst to us when we made the appointment was the fact that Harris would be announcing a new client project this week, no doubt ahead of #NRF which kicks off today in New York.

So it was that MacDonell was able to make us aware of Harris DOOH solutions to drive content in 1,000 auto dealerships by year’s end. The Automotive Broadcast Network has selected Harris as its vendor of choice for a dynamic, scalable DOOH solution to augment its popular Dealer TV broadcast at auto dealerships across North America.

The solution will deliver superior technology, network operations management, and turnkey field services, including dealership installations and support. Harris was awarded the contract due to its full-service approach for ABN.

“ABN was running its own network since 2008 but needed an upgrade with a scalable partner to move with it in its growth plans to be in the in the showrooms, service departments, welcome and waiting areas of 1,000 auto dealers in the U.S, and Canada by year-end,” says MacDonell.

The Harris DOOH solution will bring diverse and targeted content to the network screens — along with the broadcast-quality graphics, superior video quality and rich data of Harris InfoCaster technology.

“This is a subscription model, not an ad-based model,” says MacDonell. “But the programming will include customized advertising along with such content as CBS short programs. Our Punctuate technology will be used, not for advertising but for granular targeting and model scheduling.”

The complete Harris DOOH solution will allow ABN to control the entire customer experience at each dealership. But this announcement (see separate article) is only one of the many topics discussed by MacDonell, who has been her position for about two-and-a-half years after an earlier career with Corel in Ottawa.

“Harris Corporation is more of a business-to-business company,” says MacDonell. “My experience at Corel enabled me to bring to Harris DOOH more of a business-to-consumer background. That’s extremely relevant to our understanding consumer buying patterns and consumer engagement. And Corel Draw’s market included the traditional sign market which helped in understanding of the sign making potential.”

Some clients use one, others use both. In 2011 Harris announced that it was to run a whole turnkey operation with Digital Display Networks to deploy the 7-Eleven Network in 6,200 stores across the U.S. and Canada. This meant that the screens and mounts (with partners) as well as the software packages and more. There is an Infocaster player in the each of the 7-Eleven stores (1,900 still to be rolled out, as well in as the between 700 and 800 stores in Canada.) The package includes trouble shooting, field service, and everything that makes it an end-to-end solution. All monitoring of the 7-Eleven/DDN network is handled by Harris in Florida.

London’s luxury store Harrods, being one store, albeit huge, wanted instead to purchase Harris’s technology for its video walls and high traffic renderings. It has a licence for Harris’ Infocaster and purchased its hardware, but manages the network itself.

“We have tiered offerings,” says MacDonell. “And we’re seeing more new capabilities so we are examining ways to incorporate, eg., HTML5 for interactivity and an inside look and feel. We’re going through an evolution of Infocaster. We haven’t yet done anything with NFC but we are trying to filter what is of high value and what is most needed.”

We asked MacDonell what her greatest surprise was in coming to Harris.

“I thought it was really a business of supplying technology,” she says. “Its ability to provide end-to-end solutions was a surprise. It sees the importance of identifying what clients want, and it becomes an operations dialogue rather than a sales dialogue.”

Another area in which Harris heavily involved is sports marketing. Case in point is its work with Madison Square Garden. When the New York Rangers played the team’s first game of the season last September, it also marked the completion of phase one of a venue-wide renovation. Harris is providing both the digital out-of-home element and a robust core network infrastructure to support content management and playout across multiple signs, with HarrisPunctuate business management software managing advertising schedules and placements across the network.

The new look inside the arena includes a Harris DOOH network powering HD graphics and high-impact video on numerous digital display screens – progressing the level of fan engagement and the way visitors inside the venue experience the game. Fans passing by the box office, wandering the main concourses and climbing the escalators see a mix of promotional content for sports and other live events, advertisements, and – in the concourse areas – digital menu boards highlighting food and beverage selections.

The fan experience will be further heightened following the completion of the final two renovation phases, which will see the Harris DOOH network expanded to inside the bowl, upper concourses and other areas including two elaborate sky bridges. Diversified Systems (DSI), a systems integration firm based in Kenilworth, New Jersey, is working with Harris to roll out the entire DOOH network.

“We are also interested in education, and have been working closely with Purdue University,” says MacDonell.

Last spring, Purdue University, which has an extensive computer science program, collaborated with Harris Corporation to install a new 16’x9’ tiled video wall at the Lawson Computer Science Building. Purdue selected Harris InfoCaster technology as the digital signage platform to power the wall. The tiled video wall is made up of 16 x 46” LCD monitors.

The InfoCaster solution enables students to truly interact with some of today’s most advanced content management technology – and the opportunity to take this experience a step further. Students in the HCI course created interactive smart phone applications based on Google’s Android operating system forthe video wall.

Tightly integrated with the Harris DOOH platform, each Android application allows users to control and interact with the display in creative ways. Students enrolled in the course have referred to this hands-on learning experience as ‘resume gold’.

In addition, students in the class configured the InfoCaster software, gaining a start-to-finish understanding of how a digital signage platform is commissioned.

“Six months ago, Harris DOOH became part of what we call Integrated Network Solutions,” says MacDonell. “It groups us with others who sell to commercial clients. With this, we can build sales and bring each other knowledge of other clients that can help jump-start new projects. For example, Harris has a healthcare division working with hospitals. We can work with it to put communications networks”.

“And working with the CapRock division, we’re working towards putting a communications network in oil rigs in the ocean to be used for human relations, safety and other essential information. We’re currently testing with one oil rig. This is a surprise new sales channel for us. We can benefit from the other divisions of Harris.”

The oil rig business could help Harris DOOH expand into Central and South America, MacDonell says. And in the Asia-Pacific region, she expects to see further expansion in its casinos and in the banking sector.

It appears that MacDonell has a lot on her plate. And she’ll be attending the NRF Show this week in New York, one of several big shows where Harris is expected to exhibit this year.

However, NRF will be the only show MacDonell will be attending in the immediate future as she has her own, personal network to deal with – she plans to take a short maternity leave of absence with the expected birth in March of her third child.

This entry was posted on Monday, January 16th, 2012 at 11:30 @520 and is filed under DailyDOOH Update. You can follow any responses to this entry through the RSS 2.0 feed. You can leave a response, or trackback from your own site.