Mistakenly described as eye tracking by some reporters at #CES last week, Swedish based Tobii Technology, a company focused solely on eye-control technology demonstrated a number of applications for what they manufacture – from (simple) control of a notebook computer to a fully fledged re-make of the class arcade game ‘Asteroids’ (now called ‘Eye Asteroids’ of course). 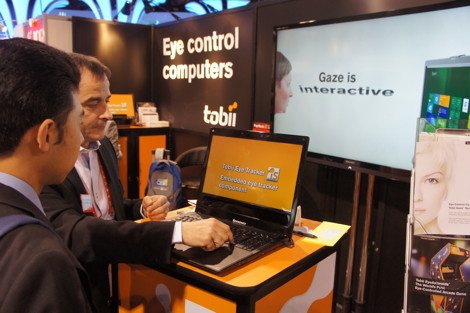 Hopefully the term ‘Gaze Interaction‘ will gain credibility rather than ‘eye control’ but we liked what we saw. The technology works and is ready it seems for prime time just as soon as companies start licensing the technology.

This entry was posted on Monday, January 16th, 2012 at 14:13 @634 and is filed under DailyDOOH Update. You can follow any responses to this entry through the RSS 2.0 feed. You can leave a response, or trackback from your own site.