Whilst we still believe that the most important technology for the digital signage and digital out of home industry sectors on display last week at #CES was Intel’s WiDi HD wireless display technology [1] the ‘winner’ in terms of sheer coolness, buzz generated and crowds wanting to go see it was on the Microsoft booth right across the hall from Intel’s stand. 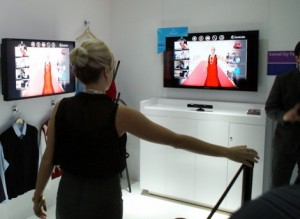 [2]FaceCake Marketing Technologies [3] MUST have received more column inches than anyone at the show (other perhaps than the OLED folks but we are convinced it would be a close-run-thing) and deservedly so.

FaceCake were the only non-Microsoft software company on the Microsoft booth (Corning’s Gorilla glass [4] were there as well mind) and were demonstrating a clever application built around Microsoft’s motion sensing input device Kinect [5].

If you are at #NRF12 this week then you can still catch a glimpse of Swivel on the Microsoft stand.

Could anyone please explain me why I need a virtual fitting room when I’m in the store? Everything that differentiate a physical store from an online store is the physical experience of the real product. Digital marketing tools should focus on the customer experience. Ask the growing numbers of women why they switch to online for clothes. They hate to go to stores more and more! Too much stress, inconvenient and products are hard to find or not their sizes. So another gadget won’t do the job.

The version to be used at home is probably a nice one for the growing online shopper market.

I could see how this would work well in store for someone who is interested in multiple items but doesn’t necessarily want to go through the hassle of trying them all on. You could essentially go through their entire inventory in minutes and only bother with trying on the items you thought looked good.