Mitsubishi Electric’s Diamond Vision OLED screen was voted the Most Innovative Commercial Display at the InAVate Awards held at ISE last year – look I even presented them with the award! but have they moved on in the 12 months since then? 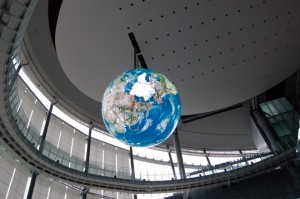 Seems to us that they might be wheeling out the same old OLED display at #ISE2012 year after year if the latest press release received by them is to be believed.

Despite again being billed as a solution that “can be assembled in virtually any configuration to create screens of any shape or size” it looks unfortunately like visitors to Amsterdam will get more of the same.

That’s the globe we saw last year and whilst the globe is 3 metres across and the screen is fully curved in three dimensions (and doesn’t look half bad) there is a lot more that could be done with OLED in terms of shape than this.

Let’s hope Mitsubishi have something else up their sleeve they are not telling us about.

This entry was posted on Tuesday, January 24th, 2012 at 09:55 @455 and is filed under Scuttlebut. You can follow any responses to this entry through the RSS 2.0 feed. You can leave a response, or trackback from your own site.