What A Rubbish Network

It’s called Renew! or at least it was when we were first briefed on the secret squirrel project, see our post ‘Bomb Proof Street Furniture‘ back in 2008.

This photo taken late’ish Tuesday 24th January (Gresham Street, London) indicates that the network (and we have no idea of the size of it just yet) is due to go live today… 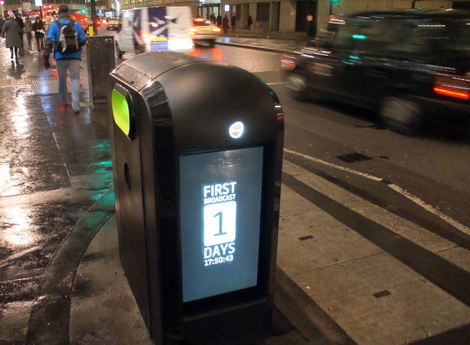 Double sided screens on bomb proof rubbish bins in the City of London are the order of the day (forget the bomb proof bit and you are not far off the New York City24x7 network that is still shrouded in secrecy).

This ‘network’ was initially touted as an ‘outdoor financial channel‘ in London’s Square Mile based around said bomb-proof litter bins.

It will be interesting to see how the PR, if or when it does finally come out, spins the whole thing. This has seriously been ‘in the works’ since about 2004.

This entry was posted on Wednesday, January 25th, 2012 at 11:46 @532 and is filed under DailyDOOH Update. You can follow any responses to this entry through the RSS 2.0 feed. You can leave a response, or trackback from your own site.

4 Responses to “What A Rubbish Network”