SAS Flybussen are renewing the digital signage solution used in their buses traveling between Oslo Airport and Oslo city center and seem to have chosen Mermaid (who seem to be winning a lot of business at the moment) who (also seem) to have a particular focus on this particular market segment. 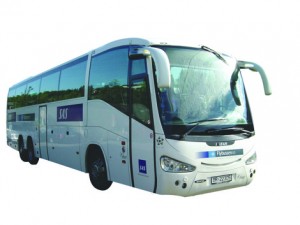 Mermaid has become a key supplier of digital signage within the Danish transport sector – several of the most prominent public transport companies signed new agreements in 2011, including Arriva, Citytraffik, Nettbuss and Midttraffik.

The agreement with SAS Flybussen starts Feburary 2012, and covers all buses traveling between Oslo Airport and Oslo city center. This new network of screens is made up of 28 screens and will be used for communicating news, commercials and relevant travel information.

Mermaid are to provide the underlying hardware and software and the agreement signed defines Mermaid as the sole integrator and operator of the platform.

This entry was posted on Wednesday, January 25th, 2012 at 20:15 @885 and is filed under Scuttlebut. You can follow any responses to this entry through the RSS 2.0 feed. You can leave a response, or trackback from your own site.