The servers got a bit warm during the 2012 International CES show, and with good reason – the figures for Twitter hashtag activity around the show turned out rather large indeed. At some points we saw 2 tweets a second arriving from the huge level of chatter around the show. In the end, just short of 350,000 tweets containing the show hashtags poured in.

We knew the show was going to be big – with 153,000 attendees milling around Las Vegas it was nearly twice the size of the biggest industry shows we’ve looked at in the past. The difference with this one – it being consumer focused and not mainly business to business – was the widespread attention, especially from mainstream media, and especially from media in the tech world. 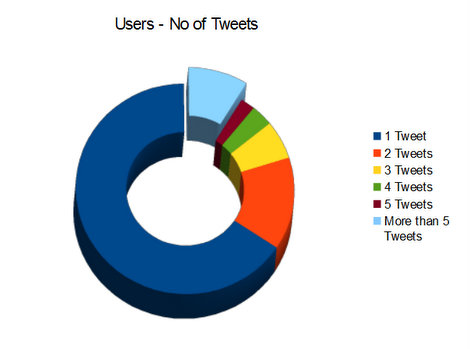 Among the large number of users who tweeted (nearly 112,000), there was quite a variation in the activity seen from them. In the chart we can see that 80% of people only tweeted one or twice during the show, with only the top 9% (the light blue segment) really active, tweeting 5 times or more.

With that level of activity came a lot of spam, largely from users (human or otherwise) tweeting the same message over and over in the hope of winning some give-away competition or other.

This made it more difficult to follow the main stream without being inundated. Two well-known tech blogs, TechCrunch and Engadget, adopted a different strategy, as both used their own show-related hashtags and didn’t use the official one (#CES) at all apart from once in a retweet from someone else. 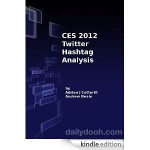 As well as the differences, there were some interesting similarities in the way #CES unfolded compared to shows we’ve looked at previously.

The full report can be downloaded from the Amazon Kindle Store in the US, UK, Germany, France, Spain and Italy.

Remember that if you don’t have an actual Kindle device, Kindle reader apps can be downloaded for Android, iPhone/iPad, Windows Phone 7, Blackberry in the US and for PC and Mac on Desktops.

This entry was posted on Friday, February 10th, 2012 at 00:43 @071 and is filed under Scuttlebut. You can follow any responses to this entry through the RSS 2.0 feed. You can leave a response, or trackback from your own site.