Niko Drakoulis, chairman and CEO, Akoo International Inc. [1], Chicago, has been named to the Entrepreneurship Hall of Fame by the Institute for Entrepreneurial Studies at the University of Illinois [2] at Chicago. 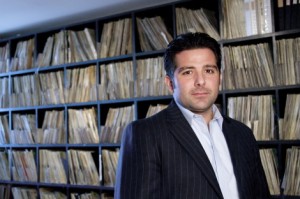 [3]The award recognizes innovators and business leaders in the Chicago area who have demonstrated the entrepreneurial spirit by founding and growing their respective businesses.

Drakoulis is an accomplished executive leader, successful serial entrepreneur, five-time patent holder, and investor who has raised more than $95 million during his career to found and lead innovative, high-growth companies at the forefront of media and technology.

Most recently, as founder and CEO of Akoo International, Drakoulis has transformed his vision into an interactive technology that has been recognized for its innovative nature and awarded patents in major global markets, including the United States, China, and Japan.

As of January 2012, AkooTV is available in 165 Akoo Pavilions, which attract 64 million consumers each month in the most highly trafficked seating environments across the nation’s premier shopping malls. In addition to making on-demand content selections on AkooTV with their mobile devices – via free mobile app or text messaging – Akoo Pavilion visitors can connect with friends via Facebook and Twitter, download mobile coupons, and participate in special promotions during an average 20 minutes of seated dwell time. As a result, an on-demand consumer transaction occurs on the network every four seconds.

Recognized for his leadership and growth of Akoo, Drakoulis has been honored by the Illinois Technology Association (ITA) as a CEO of the Year nominee and finalist for two consecutive years, in 2010 and 2011. He has also been recognized as a global change maker by Northwestern University’s Kellogg School of Management as a delegate to the Kellogg Innovation Network in 2010.

Prior to founding Akoo International, Drakoulis founded and led a Chicago-based technology company that was awarded multiple patents for its proprietary technology. There, he led the successful commercialization of a consumer digital music product; a proprietary RF wireless technology for home entertainment applications; and an online interactive technology for end-user personalization of Internet radio and digital music. For his pioneering efforts, he was named one of the “50 Hottest People in Streaming” in 2001 by leading industry publication Streaming Magazine. He sold his interest in the company to a shareholder group in 2001.

Drakoulis began his career in the wireless industry at the dawn of the mobile era. He built one of the most successful consumer retail and business-to-business distribution networks for Ameritech Mobile Communications, becoming one of the Top 15 dealers in the Midwest and serving on Ameritech’s prestigious Dealer’s Council, the youngest board member ever to serve in this capacity. Drakoulis honed his business and technical skills at a young age, working at local ethnic media companies owned by his grandfather, Peter Koutsopanagos, which included television, radio, print and cinema.

Drakoulis will be inducted into the Entrepreneurship Hall of Fame in February and recognized during the annual Hall of Fame Dinner on March 15 at the Chicago Hilton.