After a magnificent #ISE2012, that managed to creep into February, we have a couple of weeks’ gap in our industry events calendar before anything of note happens again (most of the team at DailyDOOH Towers seem to be using that opportunity to shoot off skiing). 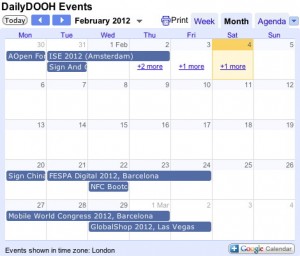 In a similar time frame FESPA Digital 2012 is happening in Barcelona 21st to 24th February 2012. Also that week on Wednesday, 22 February in Dallas is the next NFC Bootcamp.

Again in Barcelona, 27th February to 1st March is the Mobile World Congress 2012.

Wrapping up the month is GlobalShop 2012 in Las Vegas 29th February to 2nd March.

This entry was posted on Sunday, February 5th, 2012 at 17:32 @772 and is filed under DailyDOOH Update. You can follow any responses to this entry through the RSS 2.0 feed. You can leave a response, or trackback from your own site.