EXPO 4.0, held in a fantastic exhibition hall next to the airport in Stuttgart, Germany, brought four trade shows about visual communication under one roof, combining: TV TecStyle Visions; Wetec; POS Masters; and DigitalSignage Tec. While all four shows remain independent, ensuring a clear structure, the four-in-one concept also created a space where the synergies of the different areas of visual communications could be seen side by side. Personally I would have preferred to see the POS and digital halls combined to better show how digital can be brought into the POS environment. 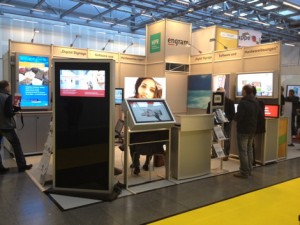 With 400 exhibitors and 13,000 trade visitors it does not rival last week’s #ISE2012 in Amsterdam, but it still gave me food for thought and an excellent networking opportunity. I met other UK visitors at Expo 4.0 who had chosen the show over ISE due to its POS focus. As a digital signage and AV consultant I always like to keep up to date on trends and upcoming technologies from all converging sectors of the visual communications industry. So straight after ISE at the RAI I found myself on the sleeper train to Stuttgart to visit EXPO 4.0. Glutton for punishment? If Carlsberg made gluttons…

My first stop was at the DigitalSignage Tec area digital signage, in Hall 2. This was the first time that this traditional POS show had put on a digital signage hall, and all exhibitors I spoke to will be back next year. My first problem was finding it – for a signage show, the directional signage was all to hall numbers, but nowhere could I find a signpost to each of the four separate shows, or which show was in which hall.

Talking to Jens Schindler, Managing Director of HF media & events, he said: “There is more to see here than just individual products relating to digital signage software and hardware.” 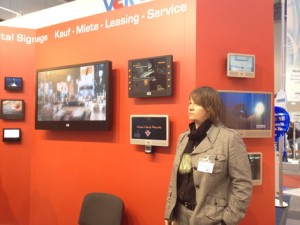 Expo 4.0 was an interesting show, and one that I think is the future of signage. For too long our industry shows have concentrated on isolated technology, being led by the manufacturers in the main. We would see integrated systems, but only on manufacturer stands, and only as a byproduct of needing to display the manufacturer’s product in context.

This is great if your audience is (as at ISE) integrators, but is confusing for end-users.

Expo 4.0 is an end-user show. Every product presented could be directly used in a retail environment. Whether it was a T-shirt and merchandise printing; vinyl wrap; or neon signs; each offering could be put straight into the end user’s business. Digital Signage here was essentially led by shopfit companies.

While the digital signage hall was small in comparison to the main halls (think Screen Media Expo alongside half of ISE), the stands showed finished systems rather than products and were led by integrators. The one exception that I found was Tridelity. The company was there with its 3D without glasses screen. They were also at ISE but their CTO, Marco Lopes, told me they had received better leads at Expo 4.0 because the audience was mainly end-users.

There has been comment from He Who Must Be Obeyed that the organisers were silly to try to compete with ISE. In my opinion, this comparison is faulty. The target market is completely different. ISE is for the industry, and Expo 4.0 is for end users, in a similar fashion to #ScreenMediaExpo. In my opinion we need both, and they should be marketed accordingly.

One very interesting company was VCR Display Systems, which builds digital picture frames, in any size. Demo units on the stand ranged from 10” up to 32”. The content on the picture frames can be updated over an IP network using the company’s basic CMS, or with sneakernet using USB memory sticks. The novelty here is that they both lease and rent their systems. This is common in software (for example SignageLive), but you would usually have to buy the hardware on which to run it. Rental is apparently a very popular option for this company, with typical three month periods for short term promotions, starting at 1 euro per day for a 16” panel. They currently have a rollout of 4000 units rented into a German retailer, updated over sneakernet, on a rolling one year contract. I questioned the cost-effectiveness of sneakernet, and their response was that the retailer was completely opposed to use of their own network for updates, and also opposed installation of new ADSL lines. Sales manager, Miriam Kopsel, told me that the 3G option was made prohibitively expensive by the telecoms operators.

In my view, another stand showing the future of signage, was the one from Efficient Information Technologies (EIT), showing eCis (Electronic Customer Information Systems). They really had it down pat. EIT is a consortium of companies, spanning shopfit, electronics, security devices and signage software. They can truly deliver a full end to end solution, and could compete very well with the likes of Grassfish on concept and execution, but can also design the furniture and carry out the installation. A true, and rare, one-stop shop. Sascha Brauner took me through the system which included pricing screens, traditional signage, content triggered by lifting secured products, and iPads for staff with product information. One of its customers has 280,000 products in stock (that’s not a typo), so staff cannot be expected to know about all of them. They have efficient search on the iPad, and can appear to be experts without showing the customer the tablet screen. When they have a presentation to show the customer, the screen can have a QR code attached – point the iPad at it, and the presentation is sent to the screen for the viewing pleasure of the customer. On completion, the screen returns to its signage loop. Very well thought out and extremely well executed. Perhaps most interestingly, Sascha also told me that they had received a large proportion of their visitors from major brands looking at how to better present their products in store.

MainStream showed their own completely integrated software system – content design, CMS, playout, with the interesting feature of being able to play out to 16 heads from a single player (no information on reliability of this), driving a 4×4 video wall at full 32Mpixel resolution. Of course, as Marcel Thomas, Key Account Manager, pointed out, very few customers have video, or even still assets, at these resolutions so vector content is key. MainStream has a large number of customers in Germany, and around the world, but is still largely unknown in the rest of the signage industry. This is probably due to the fact that they work directly with end users rather than through partners.

So my conclusion? If you’re a manufacturer, stay at ISE. If you’re an integrator and can sell turnkey solutions to end users, be at Expo 4.0 (or its vertical market equivalents) next year, but put yourself in the same halls as the traditional POS. Display and demonstrate a full turnkey solution – SMC, playout, kiosks, furniture, and maintenance. Make it clear, as VCR Display Systems put it so well on their website, and I’ve been banging on about for years, “Technology has to submit to the marketing objective”. In my words, technology is just there to get the idea from the designer’s head to the display. Everything in between is just noise to the end customer. Talk about value and ROI, not cost, and you may not even have to discount your pricing.

Bryan Crotaz is Managing Director of Silver Curve, a supplier of integration skills to resellers, distributors and integrators. They work with the industry on short and long term projects to supply technical skills that are needed to fill the integration gaps. Silver Curve builds bespoke user interfaces, data integration, content scripting, AMX programming and can help design robust, reliable rollouts. Silver Curve is also a leading expert on extending OpenSplash.

This entry was posted on Monday, February 6th, 2012 at 08:06 @379 and is filed under DailyDOOH Update. You can follow any responses to this entry through the RSS 2.0 feed. You can leave a response, or trackback from your own site.