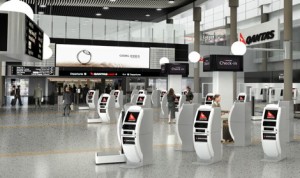 The transformation of airport media at Qantas terminals comes off the back of a recent renewal of advertising rights between the two organisations. The partnership includes the exclusive media rights to the general passenger areas within these Qantas terminals and is the largest airport media contract in the country.

With airport audiences across the four airports having grown by 28% over the past five years † EYE will be investing more than $10 million in the media redevelopment. Designed with the changing ways media is consumed in mind, the transformation will include sophisticated large format digital sites, which allow advertisers to interactively engage with travellers on their journey. The screens will include the capability for social media integration.

Qantas’ Rob Sharp, Global Head of Commercial Airport Infrastructure & Services told us “This new contract continues the long term and highly successful partnership between Qantas and EYE and will run through to the expiry of the terminal leases. We are very excited about the new interactive and engaging opportunities that the media transformation will present to advertisers and passengers alike.”

EYE’s ANZ Chief Executive Officer, Mike Tyquin was quoted as saying “Out-of-Home is increasingly about engaging with and activating audiences. Airports have always been at the forefront of Out-of-Home innovation and with this redevelopment we will be creating opportunities for advertisers to interact with the high value travelling consumer to really bring their brands to life.”

As well as the media overhaul, EYE will be offering more flexible options for advertisers so they can schedule different messages on digital inventory by day part, day of week and airport precinct.