The AV and electronic systems integration industry received the best possible start to 2012, after Integrated Systems Europe [1] broke all records. 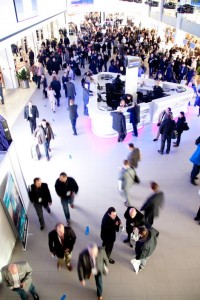 [2]A total of 825 exhibitors occupied 11 halls of the Amsterdam RAI, and were rewarded for their commitment to the event by a total registered attendance of 40,869 over the three show days of Tuesday 31 January to Thursday 2 February.

Both numbers are the highest ever achieved by #ISE2012, with the exhibitor total representing a 15% jump on 2011, while the attendee increase was just over 17%.

The show also broke new ground in other areas, with net floor space exceeding 30,000 square metres, and the number of people registering for ISE’s conference, education and pre-show event programme passing the 2,000 mark for the first time.

Mike Blackman, Managing Director, Integrated Systems Events told us “ISE is now clearly established as the best-attended event of its kind anywhere in the world. To be able to post record numbers in every key area against an uncertain economic backdrop is a fantastic achievement, not just for ISE but for the industry it serves.

“Beyond the statistics, the sheer excitement generated by so many professional people converging on a show full of dynamic new technologies created an atmosphere unsurpassed by any previous ISE.”

ISE 2012’s exhibitor total included almost 200 companies new to the show. Sam Verellen from one of them, Totem Acoustic, reported seeing “a strong range of new faces together with existing customers, all of them of good quality – we will definitely be returning in 2013”.

ISE’s ability to build new business connections among its many stakeholders has come to the fore once again. Alun Williams of Future Automation enthused “This was our sixth year here and we are still meeting new people. It’s been a lovely show with a very high quality of visitors to our stand.”

The space-rebooking process for #ISE2013 began on the second morning of the 2012 show, and resulted in a total of 28,300 net square metres of exhibit space being reserved for next year – a 5% increase on the equivalent figure 12 months ago.

Many companies have chosen to enlarge their stands, with Samsung, Sony, Digital Projection, Sennheiser, Barco, AVC Group and Optoma among those taking the opportunity to ‘size up’ in 2013.

Mitsubishi Electric’s AC Ter Meulen probably summed up the mood of the event when he said “ISE is always a busy show for us but this year has been particularly so. Our stand was the largest we’ve ever taken, but I have no hesitation in saying that the decision to expand our presence at ISE has been proved right. We’ve seen more people, and had more kinds of conversation, than ever before. This is a measure of how the show itself is growing and broadening its appeal.”