Interesting campaign up soon on some digital billboards in the UK. Primarily targeting in-car and roadside audiences the campaign includes a ‘Now Playing’ live feed using RSS to indicate the artist that is currently playing live on Absolute Radio. 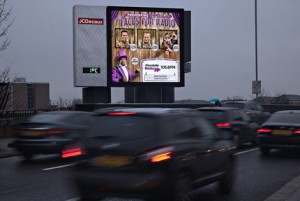 The campaign was planned and booked with JCDecaux, Clear Channel and Primesight by MEC and Kinetic, with creative by Albion.

‘Faces for Radio’ gets its digital launch on 13th February.

This entry was posted on Tuesday, February 7th, 2012 at 12:48 @575 and is filed under DailyDOOH Update. You can follow any responses to this entry through the RSS 2.0 feed. You can leave a response, or trackback from your own site.