In its latest Out of Home environment face-tracking project, Kinetic Worldwide has partnered with Primesight to explore consumer interaction with the digital Out of Home advertising network on the Glasgow Subway underground rail system. 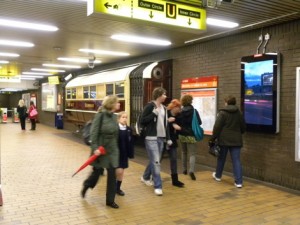 The research found that while contact numbers were highest during peak commuting hours, panels were more effective throughout the day as people engaged with the advertising for longer periods of time. Ticket hall locations provided the highest contact opportunities, as opposed to on platforms, as these face the flow of commuters and deliver an impactful experience to audiences in the combination of news content and advertising on the digital screens.

It’s had to believe that the research shows that “the Glasgow Subway has an audience with a generally happy mindset” but it did so we are told 😉 AND city centre users displayed a particularly positive expression at weekends.

While fewer people directly engaged with cross-track advertising, these panels had more ‘alert’ audiences, with a skew towards women and older generations. The digital cross-track panels are situated at one end of the platform only.

The Partick rail/subway interchange saw females most attentive, while city centre location Buchanan Street had a younger audience with more men engaged, particularly on weekdays. When compared to Kinetic’s previous face-tracking research, the digital panels on the Glasgow Subway deliver a broader demographic and with commuters willing to engage, particularly at ticket hall locations, where the digital signage clearly stood out.

Nick Mawditt, Director of Insight and Marketing at Kinetic said “This latest example of face-tracking research in communications environments shows that Subway users are generally very attentive to the panels”.

He continued “We know much more about behaviour and impact in this and other transport and shopping environments, enabling us to plan communication in the right way according to the message and the communication objectives”.

Mungo Knott, Insight Director at Primesight added “At Primesight we are focused on helping clients understand how effectively we can communicate their messages. This important study into the impact of our Primevision digital screens in the Glasgow Metro demonstrates impact, attention and emotion metrics across the diverse range of audiences reached. It proves the power of communication with a single panel delivering up to 580 contacts per hour, with individuals looking up to 6 times and consuming in a mainly happy and positive state of mind, making this a powerful communication platform.”

Kinetic have often used face tracking technology from Germany’s Fraunhofer Institute and that’s just what they did here with an HD camera placed on two Primesight digital advertising units (within the Glasgow Subway network) at Partick and Buchanan Street stations. This recorded and measured contact over a four week period providing data on: contact numbers and duration; age and gender and mood expression (happy, sad, impassive and alert).

The research also featured a separate footfall measure of subway users at the panel. The research captured more than 700 hours of data and a total of 157,700 views. This data was compared against passenger usage figures provided by the Metro operator, the Strathclyde Partnership for Transport.

This entry was posted on Thursday, February 23rd, 2012 at 13:19 @596 and is filed under DailyDOOH Update. You can follow any responses to this entry through the RSS 2.0 feed. You can leave a response, or trackback from your own site.