Four Winds Interactive, pioneering industry veteran and local Las Vegas resident, Tom McGowan was kind (did I really just say ‘kind’) enough to arrange a pre-#dse2012 hike for people he doesn’t like much… 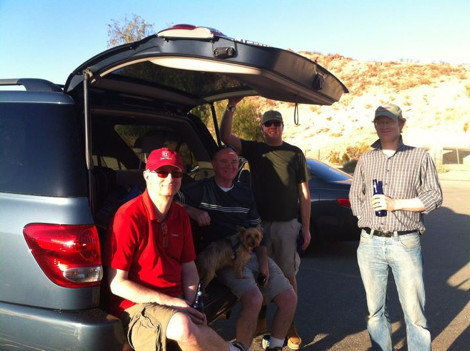 Seeing as it was at least 27 miles around the Hoover Dam in searing heat, having to fend off wild dogs and climb a sheer mountain to get back to his ‘truck’ (I steadfastly refuse to call anything I have to climb up into a ‘car’) it was hardly a light hike!

At least there was beer at the end of it, then a barbecue back at chez-McGowan and err more beer.

This entry was posted on Monday, March 5th, 2012 at 13:00 @583 and is filed under Scuttlebut. You can follow any responses to this entry through the RSS 2.0 feed. You can leave a response, or trackback from your own site.