The Digital Signage Expo [1] educational all day session by the Digital Place-based Advertising Association [2] tended to be a bit of a yawner Tuesday morning but grew more interesting with the afternoon’s sessions on creative and hit a highlight with the joint research-related session by speakers from The Nielsen Company [3] and USA Touch Points. 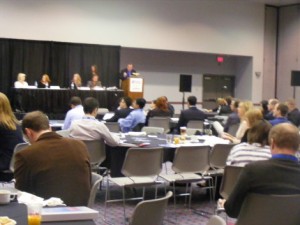 An attentive audience early in theday

This latter will result in new data on Reach and Relevance that will help digital place-based media the ability to show solid data in their arguments of why their media is particularly of value in planning campaigns.

Before more on this, let’s look at the day’s events.

Patrick Quinn, president of PQ Media [5] crammed too much material into too short a time space, thereby speaking too quickly for attendees to fully grasp much of what was said. Thank heaven for the prepared DSE folder that contained some of his screen data.

Susan Danaher, DPAA president, gave an excellent overview of the association, but we feel she was talking to the wrong audience. Most of these people are the already converted – and as one international attendee said to me, ”I heard all this back in New York last October.” However, to be fair, the audience did contain several young companies keen to learn.

The next panel and speakers were basic, although our ears perked up when Paul Price asked who was going to break out and be the Andy Warhol of the digital medium.

However, things took a real upturn when Denys Lavigne of Arsenal Media showed some of his creative experiential work for such clients as the Cirque du Soleil, Sun Life and Miami Dolphins stadium, followed by Ben Pagel, assistant brand manager, Energizer Personal Care, with his seven pieces of advice. 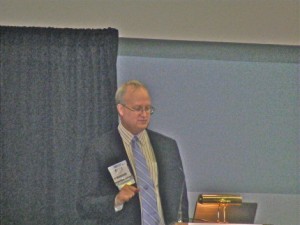 The next speakers were Paul Lindstrom, Nielsen senior vice-president, and Jim Spaeth, CEO of the Media Behavioral Institute [7], the aforementioned highlight of the day. After Lindstrom talked about the need for the Value Proposition to make to put it in the same league in agencies’ eyes as other media, he said that Nielsen has been working with various partners to help measure it in comparison to the Reach-and-Frequency model of television.

Then Spaeth took over, showing how USA Touch Points, under license from Touch Points UK [8], has spent a year studying people’s lives half-hour by half-hour through a week, to learn such information as where people are, who they are with what they are doing at different times of the day, what they are doing before they go shopping or to an event, what are their attitudes, what electronics they are using and more. 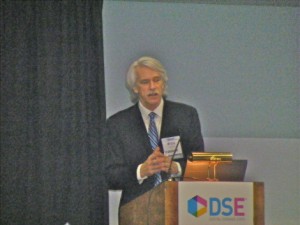 This strategic tool basically gives the new measures of reach and relevancy (as compared to frequency) and will be merged with Nielsen’s Fourth Screen Network Audience Report this year to give agencies a solid measurement for digital signage that compares with TV’s Reach and Frequency. Pricing for such information is still under consideration.

(Nielsen is also working with other partners for more strategic measurement research details. One is Keller Fay [10], digging into where social media fits and tracking conversations about brands. Its data may also eventually be incorporated into Nielsen’s Report.)

The day ended with another creative panel which was interesting but dragged on too long as the last session of the day.

Sparse room. The Data sounds interesting but knowing Nielsen, the cost proposition will be too high to support the benefit. Just saying.