One of the things that made Digital Signage Expo special this year was the delegation of more than 60 digital signage professionals from Brazil who arrived under the banner of the Associaçäo Brasileira de Midia Digital Out-of Home, aka ABDOH, and with the assistance of BrazilUSA Turismo. 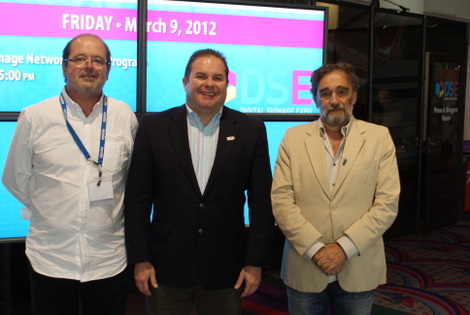 The ABDOH is a member of the Digital Place-based Advertising Association and is about to become a chapter of the Digital Signage Federation, giving it access to DSF’s educational materials and more. While many of the delegates spoke only Portuguese, limiting their ability to ask questions of DSE exhibitors, they certainly got around to see what was new throughout the two-day exhibition, and that was the purpose of their trip.

We were lucky enough to be introduced to Brazilian barbeque in the company of Arnold Eugênio Correia, ABDOH president and president and CEO of Subway Link, Ubiratan Macedo, ABDOH executive director, and Waltely Longo, CEO, TV Mulher & Mãe. As a group, they discussed the digital out-of-home industry in their country, the fastest growing in terms of DOOH in South America.

Brazil’s DOOH is currently a US$120 million industry, verified by Price Waterhouse, and growing very fast. Subway is considered the largest company among the networks, offering private channels by satellite into companies such as Walmart, Sam’s Club, Bompreço, Ri Happy, Magazine Luiza and Bradesco. TV Mulher & Mãe, that we wrote about last June, specifically targets women and new mothers during their three-day hospital stay.

The ABDOH has 18 members, all network operators. As in many other countries, their main goal at this time is standardization. The setting of industry standards that can make easier for the agencies to include DOOH in their media plans and to get solid measurements of audience and impact.

Brazil is a tightly knit community, being the only country on the South American continent to have Portuguese as its first language. The country is seeing some consolidation in the media sector, which is helping the DOOH industry become more recognized. Abril, the largest publisher, bought Elemidia a year ago. Grupo Bandeirantes bought into metro, buses and bus stations. Terra Networks was merged into Telefonica.

With these three big companies now involved, it is reducing the time barrier for stronger acceptance of the DOOH media.

“But we must market ourselves to show trust, so that people see that we are really here to stay both as an association and for our members to be seen as viable advertising vehicles,” the three speakers agree. “For us the bring 60 people here is a symbol of our strength as trustworthy media.”

One very solid way that the group is marketing DOOH is by free 30-minute webinars twice a month. At each, two or three ABDOH members talk about news and developments in their companies and in the industry as a whole. These are kept on the ABDOH website so that they are always available for agencies, advertisers and others for reference. To date, there are 13 available on the site, and the association plans to keep them going for the foreseeable future. They claim an average of 3,900 visitors per webinar. Two or three specifically-timed emails are sent before each webinar as reminders.

The group agrees that something in their favour is that Brazil is good economically at this time – an important point in a nation of 200 million people. Another is the potential the industry has with the World Soccer Cup in 2014 and the 2016 Summer Olympic Games both scheduled in Brazil’s future.

However, they agree, a weakness is the cost of new technology. The taxes reduce opportunities for growth, they say. And, like many companies in the U.S., they often face government regulations that try to limit their products’ visibility in various areas. (São Paulo is known world over as a ‘clean’ city, devoid of any signage, and a frustration to DOOH companies generally.)

“It’s important that we, as an industry, find our own identity and to continue to grow,” they say.

This entry was posted on Tuesday, March 13th, 2012 at 11:26 @518 and is filed under DailyDOOH Update. You can follow any responses to this entry through the RSS 2.0 feed. You can leave a response, or trackback from your own site.