It’s hard to believe that it is almost a year since Minicom Digital Signage and EnQii became MinQii ComQi and news just in is that ComQi President Ronni Guggenheim is to step down to pursue other opportunities. 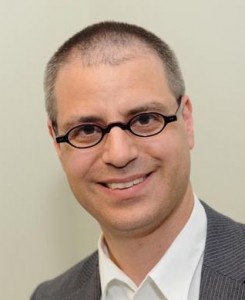 Ronni is one of the well known personalities in the industry – not loud like some with a ‘personality’ but especially good at using social media, conferences and exhibitions to magnify the work that he and his people under him carry out.

Few realise that he started his career at ABB, being in charge of their global cash management (yes, indeed). He moved to Israel in 1996 and was immediately hired by Minicom Advanced System as VP Sales & Marketing. In 2002 he moved back to Switzerland in order to establish Minicom’s European and rest of world presence.

Ronni was perhaps one of the quickest to understand that (Minicom type) products designed for computerised classrooms (and data centres) were actually of just as much use with Digital Signage. As a result of Ronni’s efforts Minicom were one of the first companies to identify digital signage as a growth industry, started to invest heavily and then ended up pioneering a lot of the media distribution technology over CAT5.

In 2009 Ronni led ‘Minicom Digital Signage‘ into its own business unit, with a masterplan to follow that with outside investment and the formation of a totally separate company.

In March 2010 Minicom officially spun out its Digital Signage division after raising USD6 Million from JVP And Aviv Ventures.

One year later (May 2011) and Ronni had worked his magic again, this time engineering a merger with EnQii.

The two companies each had VC money and both were in similar growth stages – Minicom Digital Signage was geographically quite diversified and EnQii was very strong in the US. It was certainly an interesting merger but a year on and it seems to have actually worked out quite well.

Ronni leaves ComQi in a strong position with a focus on SaaS, retail, next generation video distribution products and a bent towards mobile and social convergence. He will continue in his role as Vice President, OVAB Europe and will serve ComQi going forward as a member of their advisory board.

This entry was posted on Wednesday, March 28th, 2012 at 12:51 @577 and is filed under DailyDOOH Update. You can follow any responses to this entry through the RSS 2.0 feed. You can leave a response, or trackback from your own site.

One Response to “Ronni Guggenheim Steps Down From @ComQi Presidency”