Print Turns To Outdoor To Advertise Itself

Bloomberg Businessweek launched an advertising campaign last week to drive awareness and readership of the leading weekly business magazine with the UK’s business and media communities. 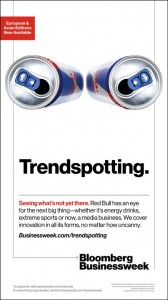 The three sets of creative, developed by Bloomberg’s internal agency, include the execution ‘Trendspotting’ inspired by recent editorial content in the magazine.

The activity running in conjunction with a media trade advertising campaign running with M&M Global and Brand Republic to promote the newly re-launched Businessweek.com site to media agency planners and buyers that now features more than 20 bite-size stories every day.

Bloomberg planned the media strategy in-house and bought the inventory through Out of Home International.

This entry was posted on Monday, April 2nd, 2012 at 09:27 @436 and is filed under Scuttlebut. You can follow any responses to this entry through the RSS 2.0 feed. You can leave a response, or trackback from your own site.