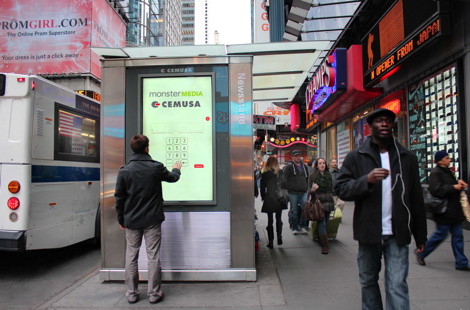 We’ve written several times before about the first digital (but not interactive) newsstands. Manolo Almagro first ‘revealed’ them back in June 2010 in his post ‘Show+Tell and CEMUSA to install digital newstands in Times Square NYC‘ where he wrote “Big, big news … Show+Tell and CEMUSA have finally, formally announced their “stealth” project that could arguably be one of the worst kept secrets in the industry. I can’t tell you how long I’ve been waiting to spill the beans on this story!”.

He revisited the subject in September of the same year ‘NYC – CEMUSA’s Digital Newstands Hit The Street‘ and the following year in March 2011 our NYC contributor JP Biamby wrote ‘CEMUSA You Don’t Have To Be Bored‘.

Apart from the interactivity (the Newsstands have already had at least one technology iteration, in the early days they were all WireSpring powered) none of this is particularly new but it’s interesting nonetheless.

Cemusa is known for its design, manufacturing, installation and maintenance of award-winning street furniture and the company operates more than 110,000 structures in 110 cities around the world.

Eight digital newsstands have been equipped with Monster Media’s interactive technology, allowing advertisers to run campaigns that utilise touch interactivity, gesture-based activation, photo/video capture and gaming in order to engage audiences and immerse them within an advertising campaign.

Use of cross-platform integration will also be available, such as mobile interactivity, SMS shortcodes and email campaigns in order to connect with viewers even after they’ve left the newsstand we are told.

The announcement also stated that Monster Media’s back-end analytics platform will provide advertisers with the critical data they need to make decisions about campaigns – the platform goes beyond traditional traffic estimations, with the ability to record interactions of all types, time-of-day data, impressions and more.

Nigel Emery, Vice President of Marketing and Business Development at Cemusa told us “We are so excited about the enhanced communication possibilities that this initiative provides to our advertising partners. Bringing interactive advertising to Times Square offers another innovative way for advertisers to get their message out at the crossroads of the world”.

According to the Traffic Audit Bureau (TAB), these Cemusa units generate an average of over 500,000 impressions per week.

This entry was posted on Thursday, April 5th, 2012 at 02:26 @143 and is filed under DailyDOOH Update. You can follow any responses to this entry through the RSS 2.0 feed. You can leave a response, or trackback from your own site.