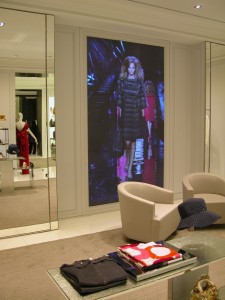 Another showpiece digital signage installation at Westfield London – this time put in by HandyAV in the Christian Dior boutique.

Christian Dior wanted to make a statement, a large visual presence featuring their fashion collection that everyone would see. Handy AV worked with the interior designers, rather than later on, and was asked to come up with a ‘Floor to Ceiling; display which stands nearly 3 Meters high.

The wall put together here is probably one of the best we have seen – it’s not completely free of showing bezels but with dark colours used for the content, even up close it looks good. It certainly is a focal point of the store.

Aubrey Wright, Director of Handy AV told us “The proposed area was greater than the largest available LCD or Plasma, so our display of choice was the Infinite bezel less plasma screen. Both LED and Projection systems had been considered, but where rejected as they presented limited image resolution and installation issues. We knew from past experience that the Infinite screens would provide the solution”.

The Infinite screens were mounted 3 x 3 to form the large portrait video wall you can see in the picture.

The 126 inch diagonal screen was incorporated into the designs plans and appeared as the focal point of the store.

We don’t understand why retail customers would ever be happy with offline / non computer driven digital signage but it seems that it is often the case. In fact this is not the first time that Handy AV have implemented a Denon DVD and Kramer distribution amplifier system!!!

Victoria Bolton, Facilities Manager for Dior said “We are very pleased with the impact that the bezel-less plasma system is having. It adds another dimension to our space and is a successful part of the unique concept of Dior’s boutiques.”

This entry was posted on Friday, December 19th, 2008 at 09:09 @423 and is filed under Scuttlebut. You can follow any responses to this entry through the RSS 2.0 feed. You can leave a response, or trackback from your own site.