If we are confused as to what digital screen advertising offerings are in the Walkabout chain of bars in the UK then you can bet your bippy that brands could be as well.

In the UK Half Minute Media operate in the TV ad replacement systems market (and in some sites have dedicated ad screens similar to those from Avanti Screen Media). In Interpub venues (where Avanti also operates alongside them) they also operate Wi-Fi hotspots (and offer a branding opportunity for their clients).

Avanti Screenmedia of course won, from Brightspace Media, the contract to supply behind the bar advertising a few years ago – sister company Kaleidovision still supply the music however.

Anyway, here we see a digital campaign on behalf of easyBus…

easyBus.co.uk take Half Minute Media on board

easyBus.co.uk, the low cost airport transfers service, part of the easyGroup, private investment vehicle for Stelios, the serial entrepreneur, has recently launched a new Digital TV advertising campaign in London leisure spots to reach cost conscious, frequent short break travellers who use London as a base from which to see Europe.

easyBus has enlisted the services of Half Minute Media, who operate digital TV and screen advertising in pubs, health clubs and restaurants in London. The new campaign will be shown across hotspots popular with these active travellers such as The Slug, Walkabout, Belushis, St. Christopher’s Inns Hostels and selected gyms in Soho and West London. easyBus is launching the campaign to further raise awareness of the travel brand and its new route to Gatwick Airport from Fulham Broadway. With easyBus ticket prices starting from just £2 one way, these cost conscious travellers can avoid having to pay sky high rail prices to and from London’s airports.

Jonathan Crick, Chief Executive Officer of easyBus, said: “Half Minutes Media’s digital network enables easyBus to target a young audience of frequent travellers and gets a relevant message across during leisure time, when they are receptive to information about travel offers. We have introduced a 30″ TV ad campaign to engage with this audience and raise awareness that they can get to London’s airports for as little as £2 on easyBus.”

Half Minute don’t claim the back bar screens (like Avanti) and they don’t rely on agencies or the outdoor specialists to explain our product or bring in any business – they do it all direct and seem to be doing it quite well! 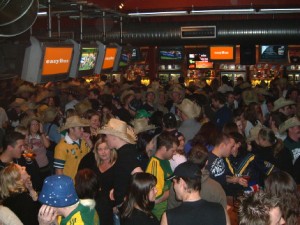 Half Minute Media’s advertisers at Walkabout and other UK sites are generally smaller companies rather than national brands – even in these tough times Half Minute Media tell us that they are experiencing 100% contract renewal from their key customers (many of whom have been with them for several years).

Half Minute Media have a bigger operation in South Africa where they are able to offer their clients totally integrated campaigns that include screen media, customer magazines / newsletters, Wi-Fi hotspots, posters and even space on the billfolds that go out to each table at the end of the meal!!!

That integration of course within the venue space is a huge plus and can only benefit both advertisers and network operators – not so at the moment in the UK pub / club / bar business we are afraid.

This entry was posted on Friday, January 2nd, 2009 at 14:59 @666 and is filed under DailyDOOH Update. You can follow any responses to this entry through the RSS 2.0 feed. You can leave a response, or trackback from your own site.