Millennial Media [1] took a different tack with its monthly S.M.A.R.T. Report by focusing on how mobile was used during the recent NCAA Tournament [2], partnering with the Interactive Advertising Bureau [3] to develop interesting insights about consumer mobile behavior.

Millennial Media and the IAB commissioned Harris Interactive [4] to conduct the in-depth survey of over 2,000 U.S. adults about how they engaged with their mobile devices during the 2012 NCAA Tournament. 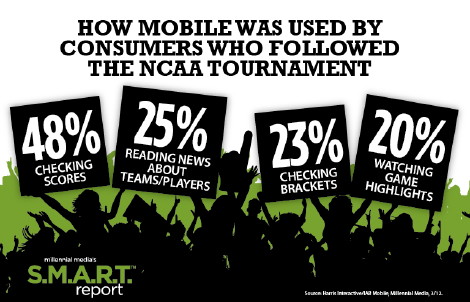 For 26% of passionate fans, fans with a favorite team in the NCAA Tournament, mobile devices became the ‘first screen’ for watching games and getting the latest news. For the first time ever, fans could purchase an NCAA Tournament app that allowed them to watch every game via their mobile device(s).

Among passionate fans of the NCAA Tournament – 88% used their mobile devices for March Madness-related activity and 40% purchased an app related to the tournament. During certain times/games, mobile activity increased more than 150%

Consumers used mobile during the tournament for:

Millennial Media management anticipates a similar consumer behavior trends during other multi-day sporting events such as the upcoming UEFA Euros [6] and the 2012 Summer Olympic Games [7].