The Case Of The Swollen Wage Bill

News just in this morning is that Amscreen have appointed two new heads and if, like us, you wonder how exactly their revenue can sustain such continued growth bear with us whilst we share with you a quick back of the envelope piece of ‘ready reckoning’ on their wage bill… 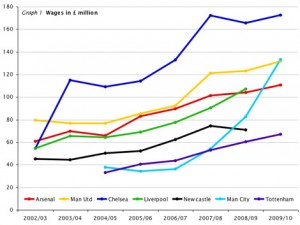 Even excluding Uncle Tom Goddard we believe that Amscreen’s payroll must be well north of GBP 2 million a year by now!

There is surely no way that their revenue can support such numbers (not only do they have an expensive London office, they have a dozen people in Bolton and an expensive German hire).

Anyway, the news is that Jamie Lindsay joins as Managing Director and Jai Pushkin joins as Head of Agency Sales.

Jai, who has several years’ media buying experience at Admedia and more recently Posterscope, will head up the sales team.

The appointments follow on from other recent additions to the team including Yoko De Souza as Director of Client Sales, Mike Hemmings as Marketing Director, James Whitbread as Account Director and of course dear old Winnie’s appointment as Chief Executive Officer for Central and Eastern Europe.

This entry was posted on Friday, April 20th, 2012 at 12:35 @566 and is filed under DailyDOOH Update. You can follow any responses to this entry through the RSS 2.0 feed. You can leave a response, or trackback from your own site.

One Response to “The Case Of The Swollen Wage Bill”