Boston-based Strategy Analytics [1]’ latest Global Mobile Media Forecast has consumers spending on content, apps and services for mobile phones expected to increase by 13.4% from $121.8 billion in 2011 to $138.2 billion in 2012. 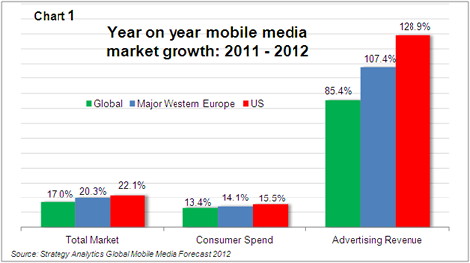 While the lion’s share of consumer spend (60.2%) is on data plans and web browsing – making mobile operators the key beneficiaries to the tune of $82.8 billion in 2012, up 9.5% on 2011 – a key driver of growth is the apps market on smartphones, such as the iPhone and Android devices. Over 23 billion apps were downloaded globally in 2011, increasing by 38% percent to over 32 billion in 2012. Apps are now the second largest category for revenues – for both consumer and advertiser spend – and are becoming the key distribution mechanism for media on mobile phones.

Apps are expected to account for 18.9% of global consumer spend in 2012 – $26.1 billion, up 30.7% on 2011 – but the strength of the apps ecosystem is also demonstrated by advertiser spend. For example, across the USA and major Western European markets as a whole, revenue from display ads on the mobile web ($934.5 million) has been overtaken by in-app advertising ($1.7 billion).

“Advertisers chase eyeballs so the fact that brands spend more on in-app advertising than the mobile web is a clear sign that apps are what consumers are glued to for an increasing range of activities,” says David MacQueen, Strategy Analytics’ director of wireless media strategies. “In the eyes of many advertisers, web browsing on the smartphone is playing second fiddle to the app economy.”

Despite remaining relatively flat in terms of spend, Music remains one of the top mobile media categories globally – accounting for $16.0 billion or 11.6% of 2012 consumer spend. However, the way consumers’ access and pay for music is changing. Ringtones are declining fast, but streaming music services such as Spotify [3], Pandora [4] and Deezer [5] – paid for by subscription or through advertising – are gaining good traction in Western Europe and the USA.

As with apps, growth of mobile video usage is increasing dramatically: 108 billion videos were watched on mobile phones in 2011, almost tripling to 280 billion in 2012. However, despite a 23.8% revenue growth, video is likely to account for a mere 2.4% ($3.6 billion) of total mobile media revenues in 2012.

“Low revenues are down to many major mobile video services being free to the end user, either funded by advertising (such as YouTube [6]) or ‘bundled’ without additional cost by pay TV providers, such as Sky Go [7] around Europe or AT&T U-verse [8] in the USA,” says MacQueen. “Despite the huge audience of 271 million users, ad revenues from mobile video are tiny – a meager $223 million globally in 2011. While ad revenues will more than triple to $726 million in 2012, it is still clearly challenging for advertisers looking to reach consumers through video ads on smartphones.”

Revenue related to Social Networking content, apps and services is expected to increase by 16.1% to $17.6 billion – accounting for 11.8% of all mobile media revenues.

Looking specifically at the U.S., its mobile media economy is expected to outperform the global growth figure, increasing by 22.1% to nearly $38 billion in 2012. US consumer spending is also expected to outperform the global rate (15.5% vs. 13.4%) rising to approximately $33.7 billion. Advertiser spend on mobile media is projected to more than double in 2012, increasing 128.9 percent to just under $4.2 billion.

US consumers are expected to spend $6.7 billion on mobile apps in 2012, a 24.6% increase over 2011, and accounting for 20% of all US consumers mobile spend. US advertising revenue on mobile apps is projected to reach $1.2 billion in 2012, a 118% increase over 2011. The strength of the apps ecosystem in the US is evidenced by the fact that in-app advertising revenue is more than double the revenue from mobile Web display advertising in 2012, which is only projected to reach $556 million.