At the Digital Brand Activation Summit in Toronto Wednesday, we met up with an excited Bill Brooks, managing partner and CEO of PowerWave Mobile Engagement, who recently learned that PowerWave, with strategic partners SurfSpot Media, E-Port Systems and Crowd Muscle Research, all in Vancouver, B.C., has been awarded a five-year contract with the National Capital Commission of the Government of Canada. 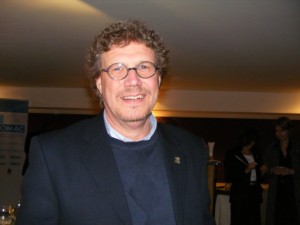 The contract calls for the installation, operation and monetization of an outdoor wireless and touch screen network in Canada’s Capital Region, including Parliament Hill, the National War Memorial, Confederation Square, Cartier Park, Major Hill Park, as well as key tourist and shopping areas in the downtown core of Ottawa.

SurfSpot Media is responsible to install and operate the outdoor wireless network (OWN) and strategic partner E-Port Systems’ interactive touch screens will be installed and operated in locations to create the touch screen nNetwork (TSN). Crowd Muscle will provide data analytics and on-line research support for both networks that will be initially set up in the specific areas in the Capital Region.

PowerWave is responsible for overall project management co-ordination, as well as the monetization of OWN and TSN by providing marketing and sales expertise over the five-year term of the contract. The first year objective is to secure a minimum of 10 marquee marketers to purchase campaign spots both on the wireless and at touch screen locations.

PowerWave, launched last year, works with companies and organizations to identify and develop rich media properties in which to deploy wireless location-based services and technologies. The company develops mobile media zones that open up new channels of communication for businesses wanting to make direct one-to-one connections with consumers. It is using Digital Out-of-Home and Mobile wireless technology and dynamic location-specific software applications to build a growing network across Canada and the U.S..

Brooks brings over 30 years of senior-level experience in marketing, broadcast, communications and business to PowerWave. As founder and president of The PEM Group, he earlierestablished a national promotional and event marketing company with offices in Toronto, Vancouver and Ottawa, creating and managing innovative integrated marketing programs for some of Canada’s best-known corporations, sports organizations and government agencies. His background also includes extensive experience in promotions, live events and syndicated radio network programming.

This entry was posted on Thursday, April 26th, 2012 at 07:19 @347 and is filed under Scuttlebut. You can follow any responses to this entry through the RSS 2.0 feed. You can leave a response, or trackback from your own site.