Well, the Strategy Institute’s Digital Brand Activation: A Place-Based Strategy conference has come to a close and, if I was to describe the happenings of the last two days I would simply say that I had attended a Mobile and Social conference, because digital out-of-home/digital place-based media had minimal to do with what was presented and discussed.

[1]There were highs and there were lows.

The definite high of day two with a great speech and accompanying visuals that wowed the audience – and unfortunately was missed by latecomers – was by Don Romano, president, Mazda Canada [2], and chief marketing officer, Mazda North American Operations.

Saying how mobile has changed the way we react to each other, superb speaker Romano kept the audience attentive and entertained with solid numbers and examples to illustrate his message of companies having to learn to work organically with customers and – because of the speed of mobile and social media – that they must have tools, training and readiness to avoid marketing mistakes.

And should mistakes happen, they must have the knowledge and ability of how to try to speedily right the wrongs. Otherwise they may deal with heavily damaged reputations and loss of revenue and devalued stock as happened in some of his examples (United Airlines, FedEx, Netflix and Kenneth Cole among them).

The only pure speech on digital out-of-home/digital place-based media on day two came from Mike Di Franza, president and general manager of Captivate Network [3]. I hope that people who seem to be always bemoaning the lack of metrics in the DOOH/DPB sector paid attention, because Di Franza made it clear that his is a media that does have some solid measurement figures and specifically planned programming for a clearly defined audience. Not a hard buy to make, I would think. 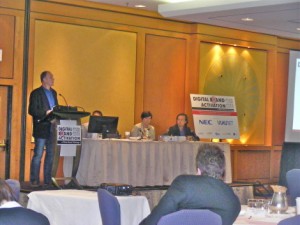 While not all DOOH/DPB media yet has the measurement that Captivate does, it’s such companies that can do a lot to build awareness and further the cause of the industry in the eyes of agency planners and buyers.

While the moderators for the panels of media planners and creatives were prepared with solid questions, neither panel was exciting, partly because, especially in the case of the former, the speakers sat too far from their microphones and tended to talk to each other rather than the audience. Since their topics respectively dealt with digital location-based media in a convergent world and innovative campaigns in DOOH, it would have been great to see a crisper control of the panels to keep them moving and more vocally focused for the audience.

Points I did note from the panels included: 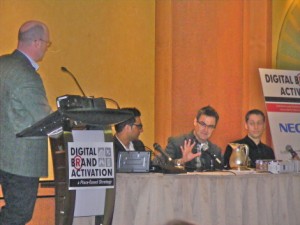 [5][/caption]As for the afternoon speakers, Matt Di Paola, chief strategy and innovation officer, MediaCom [6], gave a good talk on marketing which touched slightly on the digital topic. And we’re not sure why the team from Proximity [7] was there, because they ignored the digital topic almost entirely.

All in all, I’d summarize the two days as a fair first effort by the Strategy Institute [8] to expand knowledge of the digital sector especially to the Canadian advertisers and agencies and to show how digital connects to the brand.

Next time, a little less mobile and social and a lot more empasis on the roles of DOOH/DPB companies, products, roles and trends and their specific relationships to the brand, please.