Digital Signage World Asia 2012 was, by far, a much better follow-up to its initial staging in 2010. From both the standpoint of conference participation and substance, it was clearly a marked improvement and more stakeholders were present (allowing more exhaustive discussions). 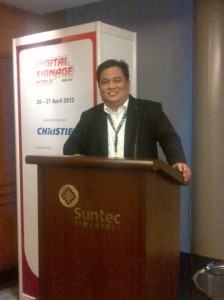 In fact, the biggest surprises came from the appearance not of Digital Signage operators or vendors – but from property owners using signage networks. Based on their comments, it appears that vendors have been pitching them products – not solutions. On Day one, conference venue Suntec International Convention Center’s Lasanthi Bandara revealed that they finally decided to design their award-winning Digital Signage network in-house!

The following day, Cecilia Pang Siew Keng of Alexandra Health started her talk by asking vendors in the conference to see her, as she needed more from the Digital Signage network at their Khoo Teck Puat hospital, but could not get the appropriate support from their current providers.

The speaker line-up drew out a number of insightful decks as well.

Steve spoke of his own experience with a simple in-store digital signage for beer brand Labatt which has been demonstrably delivering sales uplift over time.

At the end of the conference, what became apparent was a need for Asia to now start looking into its own body of work for case studies. There are nuances to the Asia landscape that need to be highlighted, and learned from.

The region does get DOOH. In fact, media powerhouses such as Singapore Press Holdings, The Times of India the the Reliance Group, Telkomsel Indonesia’s Infomedia, and Summit Media, in Singapore, India, Indonesia and the Philippines respectively seem to have all taken the cue from CBS Outdoor and Clear Channel, crossing over to establish OOH units to serve their audiences on the move.

DOOH in Asia seems to have been quick to gain yards. As it grows more comfortable in its own skin, you can almost hear a mad rush of global players seeking to cash in on the region’s promise. One piece of advice: the market learns very quickly; and if DOOH vendors insist on pitching products instead of solutions, expect clients to look elsewhere right away – if they don’t decide to do it themselves, that is.