AddMirror Canada Ltd. [1], Toronto, has recently completed an expansion of its Vancouver resto-lounge network, doubling its network coverage in the market. 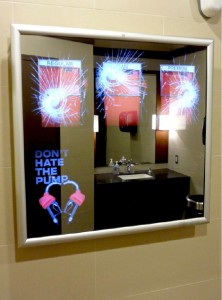 Ford for the 2012 Edge and its Ecotec engine

In addition to Vancouver, AddMirror can be found at contemporary lounges and chic/trendy restaurants in Calgary, Toronto and Montreal. A fully functioning mirror, the AddMirror comes to life as the consumer approaches it, creating an unprecedented impact. The locations provide the advertiser exclusivity with a high quality audience at great venues.

“AddMirror delivers 69% unaided recall and a viral buzz created by consumers talking about the ad with their friends after seeing it,” says Elliott Atkins, AddMirror Canada. ”AddMirror is off until the consumer approaches it when a motion sensor activates the ad creating an element of surprise and impact that makes the ad memorable.”

The company currently offers more than 250 AddMirrors, with each location offering one AddMirror in the men’s washroom and one in the women’s.

“This is key to the exclusive nature of our offering,” says Atkins. “There is only one advertiser in an AddMirror during a chosen campaign period and no other advertiser in the washroom, so there is no clutter and no competition for the consumer. We focus on higher quality venues and an audience that is socially active and has a high disposable income.”

Ads typically run for four weeks but the company has had campaigns run as long as 12 weeks and as short as a weekend for a special launch. Advertisers can buy nationally (eg. Ford), regionally (Telus has been buying Calgary/Vancouver for is TV products) and gender specific (BMW bought male only, Calvin Klein bought female only for Beauty and both male and female for Euphoria). Ford, Telus, Calvin Klein and Bell are among those that have used the AddMirror multiple times.

“AddMirror owns the mirrors, installs and maintains them, sells and changes the ads, and pays the restaurants a guaranteed fee every quarter,” Atkins says.

Media City [3] with offices in Toronto, Montreal and Vancouver, handles sales for the AddMirror in Canada and its national team is responsible for ad changes in each market. (Changes take less than five minutes per AddMirror.)

AddMirror Canada was founded in 2008 and the network launched in 2009.