Watchfire Digital Outdoor appears to be taking a page from Lamar’s pagebook, but is taking its own version to a much wider audience. 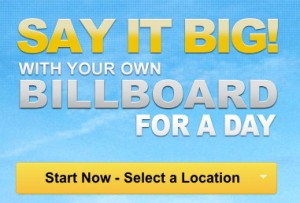 Like Lamar’s recent announcement of offering Lamar Postr to allow people in Little Rock, Arkansas, billboards for a day, Watchfire has created BillboardToday.com, a website that will allow the public to buy short-term space for a premium rate on Watchfire digital billboards across the country.

The site was developed to fill extra ad space for billboard operators. Advertisers buy ads for short periods of time, much like newspaper ads. It’s a convenient way for people to purchase short-term messages for wedding proposals, birthday wishes, short-term retail sales, ‘For Sale by Owner’ properties and other one-to-three day needs.

The new site was announced by Watchfire at the 2012 TAB|OAAA Out-of-Home Media Conference and Marketing Expo being held at Miami Beach April 30–May 2, 2012.

The site is exclusively for Watchfire digital billboard operators and unlike Lamar’s straightforward announcement of USD 25 a day, Watchfire did not announce a price.

Instead, it says that the cost will vary by market. The messages can be booked 24 hours in advance and no more than two weeks out. This option is intended only for personal messages.

“We realized a site like this can help our customers fill empty ad space and do it at a premium rate,” says Darrin Friskney, Watchfire Digital Outdoor’s vice-president of sales.

The site not only provides ad space to individuals who may want to buy as little as a single day of advertising on a billboard, it increases revenue for Watchfire’s billboard operators who have extra ad space available.

Neil Bell, Watchfire national sales and marketing consultant, says, “Our billboard operators have been approached to post personal messages like, ‘Welcome Home, Soldiers’ or ‘Happy Birthday’, and until now they didn’t have a convenient mechanism to sell, create and schedule the ad without disrupting their day-to-day business. We think Watchfire’s BillboardToday.com might help our customers add thousands of dollars to their bottom line annually. And all they really need to do is sign-up!”

In response to the demand for a simple way to display personal and short-term messages, the process includes letting advertisers create a message, schedule it on a local billboard in their area and purchase the ad online. The Watchfire operator simply approves messages, and then the ads are displayed.

“The website is a portal for advertisers to find and purchase the space as well as create what they want on the board,” says Bell.

Different municipalities require different hold times (six to eight seconds). This means the advertiser will have 550 to 12,000 messages per day, depending on the market. The size of the ad will be determined by the billboard operator in each market.

Watchfire has been manufacturing LED signs since 1996 and has more than 40,000 outdoor LED signs and billboards in daily operation throughout North America. It has over 100 billboard operators and they are all eligible to participate in this new program

This entry was posted on Tuesday, May 1st, 2012 at 07:28 @353 and is filed under DailyDOOH Update. You can follow any responses to this entry through the RSS 2.0 feed. You can leave a response, or trackback from your own site.