Beneful [1] brand dogfood’s is running a new integrated brand campaign, which includes TV, digital and OOH elements, including the launch of five interactive dog parks in cities around the country, among which is a 64’ long digital interactive wall and massive vinyl display in New York’s Columbus Circle subway station. 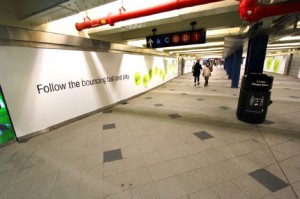 [2]The ‘Play, it’s good for you’ campaign was created by Fallon Minneapolis [3], Beneful’s Agency of Record. The agency launched Beneful’s first ever brand ‘Anthem’ in mid-March. The commercial, told from the perspective of a dog at play, was followed shortly by a series of spots centered on Beneful’s dog food and new line of dog snacks. All of the work in the campaign focuses on the importance of play to dogs and owners – encouraging pet owners to be happier by making time for play.

“I think our team struck on a universal truth,” says Mike Buchner, Fallon’s CEO. “We can all use more play in our day. That’s why every aspect of this campaign, from the Anthem spot to the great installation work, rings so true with pet owners. Each is a simple reminder that playing isn’t just good for our dogs, it’s good for us.” 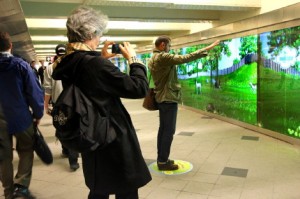 Commuters walking past the screen are instantly detected and a dog will run up to chase and play with them. Users who do engage in the game of virtual fetch can even choose their dog’s colour, size, snout, tail and fur pattern. The dogs have a robust artificial intelligence that allows them to show a variety of emotion while being playful. They respond in life-like ways, including pawing at the screen, rolling in the grass and encouraging users to interact. 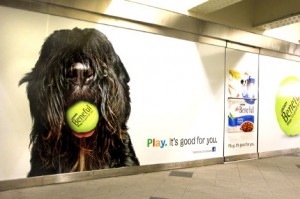 “To our knowledge, no one in the advertising world has ever created a digital screen this size and with this level of interactivity,” says Steve Birnhak, CEO of Inwindow Outdoor, who also partnered with CBS Outdoor [7] on the project. “For one month, the wall will be a can’t-miss, can’t ignore highlight of one of the busiest subway stations in the world and we’re excited to watch weary subway riders take a minute out of their day to have some fun.”