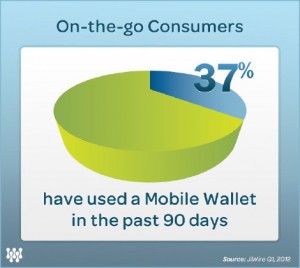 The JiWire Reprt says that the tech-savvy C-Level executive has emerged.

Contrary to popular belief, C-level executives and small business owners have become more tech savvy as they embrace location-based apps and find themselves more in tune with location than ever before. 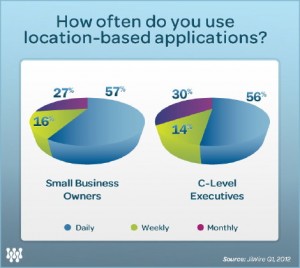 In terms of Mobile Wallet Services, a recent study from Pew Research Centre found that experts believe that mobile payments could eliminate the need for consumers to carry cash and credit cards by the year 2020., JiWire’s report discovered that mobile users are becoming increasingly comfortable making purchases on their smartphone or tablet, and are looking to mobile wallet services to fund digital and in-store purchases.

“This rapid adoption of mobile wallets reinforces that the market is ripe for this sort of technological advance,” says Dee Dee Paeseler, director of strategic marketing at JiWire. “Consumers seem to be both comfortable and curious about using their mobile phones to purchase. This trend is likely to help both brands and retailers close the loop on mobile transactions, ultimately taking them to the next level.”

In regards to Wi-Fi Usage on Smartphones and Tablets, constant connectivity on these devices is vital to on-the-go consumers. JiWire’s Q1 Insights Report discovered that consumers are heavily using public Wi-Fi from mobile devices. Connection from laptops has decreased from 70% last year to a current 55%. Further, nine out of 10 consumers report that advantages for choosing public Wi-Fi instead of 3G/4G on smartphones nclude: 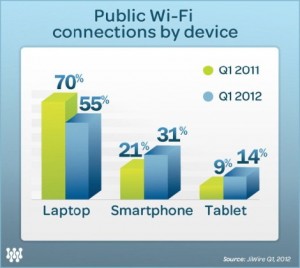 Only 10% of the on-the-go audience indicated that they do not use public Wi-Fi, opting instead to connect with 3G/4G and/or to exclusively use broadband cards.

Comparison shopping on devices remains constant with the main goal of comparing prices, specifically. In Q1, 49% of in-store shoppers price compared with other stores, while 15% compared with the store’s own website and 13% searched for mobile coupons.

In addition, the study found that consumers between the ages of 25 and 44 are the most likely to price compare while in store – 54% price compared with other retailers while 19% searched the store’s own website. Further, comparison shopping is more popular with men (53%) compared to women (43%).

This entry was posted on Tuesday, May 8th, 2012 at 05:01 @251 and is filed under DailyDOOH Update. You can follow any responses to this entry through the RSS 2.0 feed. You can leave a response, or trackback from your own site.