It’s been a while since we had heard from Reach Sports Marketing Group Inc. [1], based in Eden Prairie, Minnesota, and when we ‘reached’ out to ask what’s new, we found that a large part of the team had just returned from a sales incentive trip to Barcelona. 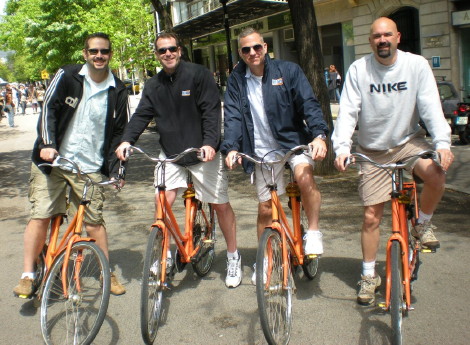 Not only that, but Reach had been named one of the ‘100 Best Companies to Work for in Minnesota’ by Minnesota Business magazine.

“Locally, it is a prestigious award to win, which speaks to our culture and passion in the Digital Signage space,” says Darren Wercinski, CEO and co-founder. “Since we’ve got to know quite a few people in the industry over the last six years, they’ll probably get a kick out of how a couple of beer swilling fools from Minnesota could win that award!”

We’ve been following Wercinski and Marc Kline, Reach’s co-founder and executive vice-president sales and marketing ever since we met at the first strategy Institute Digital Signage Investor Conference [3] we ever covered in 2009 and, for all his fun comments, Wercinski and his team expect to have some serious announcements by early summer and we’re anxiously waiting to hear what these will be.