“Intel’s goal is to continue to facilitate a frank exchange among industry leaders on the positive role in-store digital media plays in strengthening consumer engagement and becoming an indispensable enabler of great consumer experiences in the store” says the Intel blurb that we were not sent. 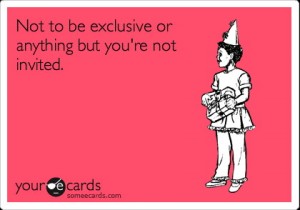 Mind you, we are in good company in not receiving an invite.

We spoke to a dozen prominent folks in the European industry today and only found one (actually not even that prominent) who even knew about the event next Tuesday afternoon, May 15th at the Shakespeare Globe (in case you wanted to know).

If Intel wants to p*** off as many of its hardware and software partners as it possibly can it’s obviously going about it the right way, the invite says it is “a by-invitation-only event for a select group of retail marketing and technology leaders” – so ‘select’ then that the ‘technology leaders’ we know who are making a difference to the industry don’t even know about it. No doubt the event will be full of cheaps, sperrings and various hangers-on.

Here’s what we are all missing out on… “We are planning to have an engaging and highly interactive program, followed by an evening of great food and wine. As part of the event, we will share with you how in-store digital media is currently being deployed worldwide, hoping to inspire you to new ideas“.

As Intel say The Future of In-Store Digital Media – Tuesday 15th May – an event not to be missed unless you are not invited of course!!!

This entry was posted on Thursday, May 10th, 2012 at 14:01 @625 and is filed under Scuttlebut. You can follow any responses to this entry through the RSS 2.0 feed. You can leave a response, or trackback from your own site.